Zanac is arguably one of the greatest vertically-scrolling shooters ever to grace the NES, although it originated on the MSX. In any case, it's amazing. 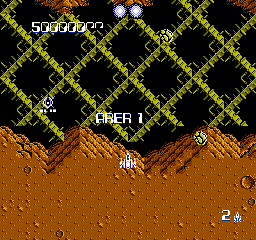 Curiously, while the Japanese version contains the Keyboard-reading routine, it is not referenced anywhere else in the game's code. The rest of the debugging code doesn't seem to have been programmed in yet by the time of its release.

NOTE: Some emulators have a bug that prevents this code from working properly. See the Notes page for more details. 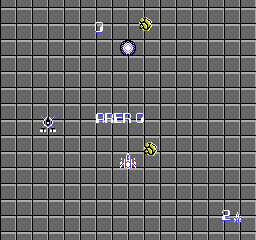 Use stage modifier 0091000 to access Area 0. Area 0 uses Area 12's music, loops endlessly, and is devoid of the numbered weapon powerups. It appears to be either a memory filler stage or possibly a test stage. It seems like it could have been used to test enemy patterns, in particular the game's AI system and the effects on it caused by shooting or not shooting the Sart enemies (seen in the screenshot to the left of the Zanac ship) that lower or raise the AI. 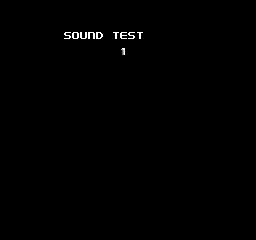 As with The Guardian Legend, another game by Compile, hold A + B and press Reset to access the Sound Test. This feature is in the NES version only.

Press Reset (×13), then press Start to go in the main game menu. Press Left or Right to choose a level, then choose the "continue" option and press Start. To start at Area 11 or 12, hold Up on Controller 2 as well. Do the same if you want to continue the game after Area 10.

In the main menu, press A + B to enter the game and change the appearance of the player's ship.

In the ending scene, after the standard credits appears, the fairy will move to center of bottom area of screen. Wait some seconds (the time is shorter in US version) until the fairy moves to end of "Created by Compile", then press A + B on Controllers 1 and 2 to display "SEE YOU AGAIN IN GUARDIC". Guardic is another shooter by the same company for the MSX, released the same year as the FDS version of this game. While Compile released an NES game named Guardic Gaiden two years later (known overseas as The Guardian Legend), it has no relation to this message whatsoever.

In the Playstation version, the text becomes "SEE YOU AGAIN IN ZANAC NEO" instead, where the "ZANAC NEO" refers to Zanac X Zanac itself.

In the FDS version, tile 1 special weapon does not have the strongest form of moving slowly counterclockwise.

The Degid color scheme that appears from the bottom of the NES version is different from the FDS version.

In the NES version, the "Capital Ship" mini-bosses change color from blue to gold to pale yellow with red lines as their life is depleted. In the FDS version, those same mini-bosses remain blue throughout.