A prototype similar in concept to Ghoul School; a hip 90's kid must save the day from a school full of zombies and the undead. This prototype is fairly bare-bones; it directly boots into the game, but is unplayable past a certain point since certain enemies don't take damage. What's done of the levels so far is surprisingly thorough, with a multitude of enemies, objects and even three bosses. There is sound, but the sounds seems to have been lifted from Crüe Ball or some prototype thereof (it's possible it's the other way around, since Crüe Ball has a large number of unused/variant sounds). Given the similarity of this and Crüe Ball's debug menu, coding is also likely shared, though it's unknown if NuFX developed this prototype. 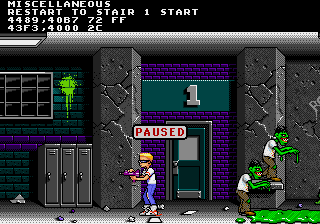 A coordinate display is also present, regardless of which of the Debug Menu functions are displayed. The top column displays Travis' X and Y coordinates as 16-bit "word" values. Following is a byte representing player health, and after that, a byte representing player ammunition. The bottom column displays the current screen position in X and Y coordinates, again, as 16-bit values. The final byte is unknown, but it seems to increment frequently and appears to be related to projectiles.

There are a total of 47 (00 to 2E) palettes. It appears this menu doesn't actually work; all the color values are hard-coded and reset after you make a change.

There are many menus involving individual non-enemy object actors. Each object type gets its own menu with an entry subcount, and each object type menu has its own list of menu items. Unfortunately, much like the other data, these appear to be uneditable.