They're monsters! And they're real! AAAHH!!! 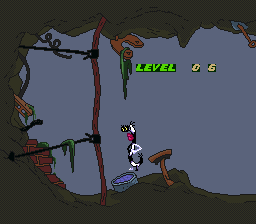 As soon as the green background of the title screen appears, you have about 5 seconds to enter this code:

This will require practice to enter successfully as the time limit leaves almost no room for delay. It needs to be entered FAST. Also, make any mistake, and you are locked out of the cheat entry for that session (not that there's enough time for a second attempt, anyway). A few tips:

Memory address 7E1D6F holds the progress of the cheat: it will be $07 after the first step, $0F after the second, and $18 after the third.

Memory address 7E0200 holds a 16-bit timer, and the cheat must be fully entered before it reaches $00BE. To disable the timer, use Pro Action Replay (PAR) code 86AAA800.

Or just use Pro Action Replay (PAR) code 7E024506 to access the menu directly after the license screen on bootup.

Once in the level select screen, use the D-Pad to press Left and Right to change the index value and press Start to begin. If you press L, invincibility is turned on (bit 0x02 set in 7E13E4). Use R to turn it off again.

Set bit 0x01 in 7E13E4 to enable infinite mid-air jumps (Pro Action Replay (PAR) code 7E13E401). Unlike the Genesis version, this isn't set along with the invincibility bit. In fact, the game won't recognize when both are set.