Alien Soldier is a high-octane "boss rush" style run-and-gun that was released late in the Mega Drive's life. While the US release was available on the Sega Channel, American hardcore gamers had to wait until 2007 to see a proper release on the Wii Virtual Console. 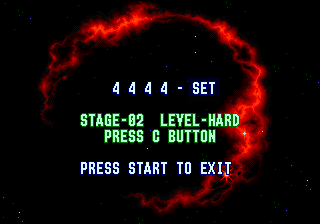 The password screen should technically allow the player to go to any stage on Super Hard mode using a password; the only issue is that the passwords for Super Hard are exactly the same as their Super Easy counterparts. Simply editing one of the Super Hard passwords in the ROM will cause this feature to work. 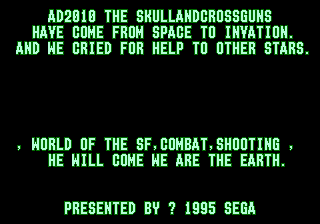 The early title screen text seen in magazine previews still exists within the game. It appears that the font graphics were rearranged, resulting in discrepancies such as a "?" being where a "©" should be. 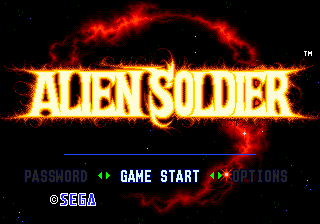 A unique ©SEGA copyright graphic is loaded on the title screen, but it's shortly overwritten by the copyright text. Disabling the text allows this graphic to be seen.

Controls: Down and Up - scrolling letters. B - changing letter. A - autoplay.

Both features that would have utilized this 8×16 Japanese font were cut from the game, resulting in these graphics going unused.

Located at offset 0x188A16 are unused scene graphics of Kaede and an unknown man. The palette used by these sprites are loaded in during the intro, indicating that this is where they were intended to be used. The sprite of Kaede can be seen in a magazine preview. 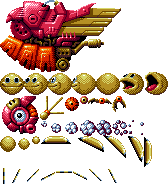 There is nowhere in the ROM that points to these graphics located at 0x1291DE, leaving their intended usage to be unknown. These could have possibly been used by a boss, since they're located near other boss graphics.

An unused boss that resembles a hand. It can be seen being fought in prerelease screenshots. 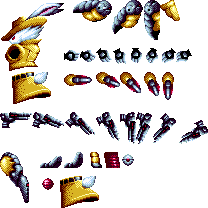 A rabbit boss with a cowboy motif. This one doesn't seem to be particularly finished; in fact, it does nothing. There does exist at least one unused animation for it, which depicts the character firing its gun. You can change the direction it's facing by pressing A/C, and you can move the gun by using the d-pad. This boss was once meant to appear on the box art of the game, but it was removed for obvious reasons.

An unused dragon boss. The code for this boss doesn't work.


As it turns out, Seven Force was actually intended to have 7 forms. The last 2 forms, Harpy Force and Nemesis Force, were never finished due to time constraints. 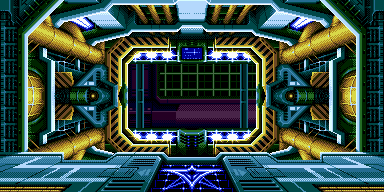 An entirely unused area, seen in prerelease screenshots, with 4 "stages". These stages were meant to take place after the snowy mountains area, as indicated by the location of the data in the game ROM. The first boss you must fight is Jampan, who is instead encountered in the aforementioned mountains area in the final game. The second boss is Lambda Bunny, who is unbeatable, so the game automatically advances to the next stage. The third boss doesn't work, but the graphics loaded into VRAM reveal its appearance: A praying mantis. The fourth and last boss uses code that is identical to the praying mantis'. Like the mantis, its graphics are loaded into VRAM, revealing it to be a mechanical fox, likely the scrapped "Sigma Fox" character seen in design documents. Human versions of Lambda Bunny and the mantis are loaded in as a part of the background's graphics set. 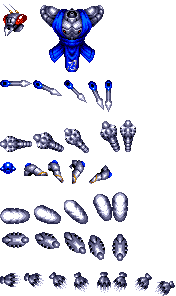 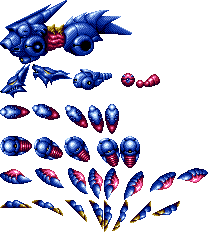 Located after the data for the stage where Missiray is encountered is unused stage data for a laboratory area. A short cutscene is played where Kaede goes down an elevator and walks into the lab. The stage then completes itself and the game moves on to the next one.

Unused SFX of Kaede saying "Harpy Force", meant to be used when transforming into the scrapped Seven Force form of the same name. 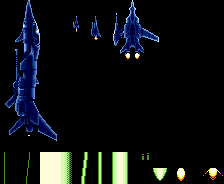 There is an unused cutscene intended to be played at the beginning of stage 17 where jets ascend into space and get obliterated by Epsilon 1's laser beams. The scene is meant to have 2 lines of dialogue, and it uses Seven Force's unused line as placeholders. An early version of this cutscene with slightly different graphics was once used in a prerelease build of the game seen in magazine screenshots.

Unused screens of text that give an update on the story's current events. It can be inferred from the multiple early names that these screens derive from much earlier in development. The screens are skipped by pressing the start button. They can be activated by changing ROM offset 0x00036C to 4E714E71 and 0x01E276 to 4E714E71.

A mikan is a type of mandarin orange native to Japan, which would explain the appearance of the creatures in the background.

Change ROM offset 0x00B462 to 67 and it will enable unused code that activates a dialogue exchange before fighting each boss. The dialogue only appears at the first attempt of a boss fight, and the text can be advanced more quickly by pressing any of the face buttons.

The Japanese version displays "VISUALSHOCK! SPEEDSHOCK! SOUNDSHOCK! NOW IS TIME TO THE 68000 HEART ON FIRE!", and displaces the logo and copyright notice downward.

The introductory text scroll is different in English, with different names for A-Earth/Sierra. The Japanese version also has Japanese text scrolling right-to-left at the bottom.

The Japanese version has spelling mistakes, including "terrolist", "despatched", "continum", "whitch", and "intension". The European version changes A-Earth to Sierra and A-Human to Sierrans.