Aliens is a shoot em' up game based off of the 1986 film of the same name. This time, however, Ripley has short blonde hair for some reason.

An unused Alien type, which is Hermit Crab like Ovomorph with tentacles. It contains animations for: emerging from it's egg, moving, jumping and spitting either the Face Hugger or a projectile stored near this enemy.

The Stage 5 Boss, Electric Xenomorph is a sprite edit of the basic pink type with shared tiles for legs, which has full set of frames for moving and attacking.

While moving animation has 8 frames, the amount of used frames is only 2 of them, probably caused by a bug or a decision to make the similarity less obvious. The same implies to attack animation, meaning that the boss uses 2 frames for every action. 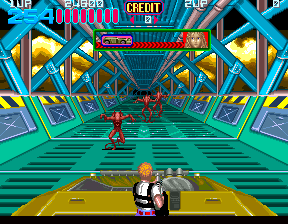 The second and fourth stages of the US/international version, both of which are set on the APC, are left out of the Japanese version. This was likely done to remove any appearances of Newt due to the element of child endangerment, as she is also nowhere to be seen in some of the side-view stages.

Konami made at least two different versions of the arcade board for US/international release. One is on a single PCB and the other (which seems to be less common) uses two PCBs stacked one on top of the other. The two PCB variant is harder (even with the dip switches on easy) as it does not give the player health power ups and the default weapon no longer auto-fires. Instead if the player holds the fire button down the default weapon will only rapidly fire for a second or so before requiring the player to release and press the fire button again.