In Art of Fighting, Ryo Sakazaki and his best bud Robert Garcia beat up a bunch of thugs to rescue Yuri, Ryo's younger sister, but only end up with the very first cliffhanger ending featured in a fighting game. 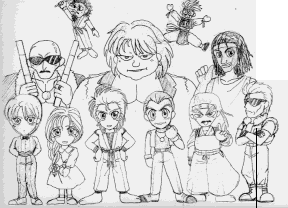 This picture of the game's cast in chibi form is stored near the end of the graphic data in the game, including the line across John's body. The palette is incorrect, and it is currently unknown if this picture can be displayed during normal gameplay.

While most of the fighters are not playable in 1-player mode (except Ryo and Robert), they still have a "time over" animation that's only shown in the Initiate Super Death Blow bonus stage. By modifying the value to 02-09 at address 1092C3, you can play with the rest of the characters in 1-player mode, and see their unused animations.

While the whole cast has visible head damage, King was originally planned to be the only character with chest damage. Some of the animations were seemingly complete before the feature got removed; her famous "undressing KO" feature seems to be a leftover from it.

For some unknown reason, Ryuhaku Todoh has a bunch of unused damaged sprites with alternate heads, one with short hair and the other completely bald. Neither of them have his characteristic moustache and/or headband.

Playing the sound code x0741 via a Neo Geo music player such as M1 or a modded system that uses the Universe Bios will start this song, which is not used anywhere in the game. This song was also omitted from the game's original soundtrack album.

The in-game announcer typically mentions the stage name and number while you're in the map of South Town. It does this for every stage except for the first one, since the map isn't shown when you start a game. Regardless, the game does have a sound clip for the very first stage that is never used. You can listen to it by playing sound code x07D4 on a Neo Geo music player.

There are three unused voice clips in the game.

Robert: "What did you say?"

Presumably, these two clips would've been used in the ending, had it not been a cliffhanger. Ryo's voice comes immediately after Yuri tries to tell you Mr. Karate's real identity in the original soundtrack. However, the second clip is not included.

A female voice? It sounds a little bit like Yuri, and it doesn't resemble King at all.

The above sounds were likely meant to be said by the announcer when you won, lost, or someone got a perfect win - but the announcer never says anything other than "Round X" and "Fight". Despite never being used, these three sound clips were included in the game's original soundtrack.

John has a couple of region specific voices: