Robert goes to Mexico! Ryo and Yuri follow him! Romance! Drama! And a pelican!

Activating any debug dip switch will also enable a frame advance mode. Press P1 or P2 Start to advance a frame while the game is paused during a match. (This works best in console mode.) 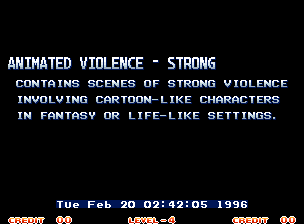 Additionally, this will cause a build date to appear in the content warning screen that appears when the game is in attract mode on a US MVS system. The same date is in both the World and Korea versions of the game.

Note: Turning on Developer Mode by setting Ox10FE80 to 0x01 will also enable the same effects as Dip 1-3, activate the stage selection screen described below, and show the build date, but it will not turn on frame advance while paused. 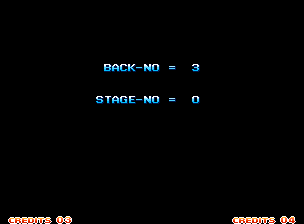 Turning on any of the debug dipswitches will activate a stage select screen after selecting a character in normal or versus mode. BACK-NO selects the stage the fight will take place in, while STAGE-NO chooses your starting level. Press Left or Right to change BACK-NO's value, and Up or Down to change STAGE-NO's value. Press A to begin a normal game with the background of your choice, or press B to start a one player game on the level you chose. Set STAGE-NO to 8 to begin on the final fight.

Both Sinclair and Wyler have zoomed out walking animations which were meant to be used in the character selection screen, but since you have to move the cursor off the screen to select them, they are not visible.

There's also an unused animation where Wyler reverts back to his normal form while facing down. Since he never falls on his face - no matter what you do, he always falls backwards, even when losing by time over - this is unused. 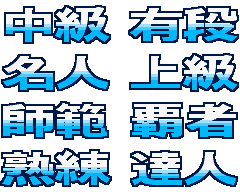 Once you reach nine wins in versus mode, the game grades you depending on how many fights you've won so far. In the Japanese version, you get graded with two kanji. There are large versions of these rank graphics in the game's graphic data, but they are never used anywhere. The name input screen and the versus ranking shown in attract mode use smaller graphics stored elsewhere.

Playing the sound code 0x073A via a Neo Geo music player such as M1 or a modded system that uses the Universe Bios will play an alternate version of the attract theme with a different introduction.

There are multiple text strings in the game that suggest that a test menu may still be in the game. Presumably this would be activated via the debug switches, but it is unknown how to access this. The text begins at 0x01C21A (uninterleaved program data):

Text strings for many of these menus are scattered across the program data at various locations. 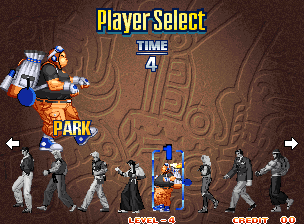 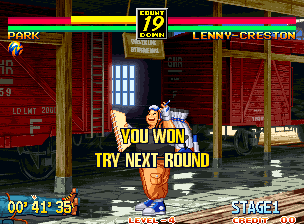