At Least There Is Čeda Čedović is a game inspired by Super Mario World and Super Mario Bros. 3, featuring a lot of Serbian memes and obscure humor.

A gamemode specifically for speedruns, which would include a timer and records. Some leftovers of it can be found in the "save_ui" image at path Assets/Texture2D and game's project file (that also contains rest of text for the game, while file itself not as accessible), including an icon of it for the save select menu:

A room nearly identical to Emily Money's room, but without any doors and with a hint block in middle. It was used during testing after completing every level. There's still hint block text from this room in the game's folder, which says: "Point of advice: We have run out of levels. Please enjoy the Black Room of Fuck."

All of these images can be found at path Assets/Resources/sprites.

End of the Demo

This image was supposed to be used for the demo of the game, but one was not released. 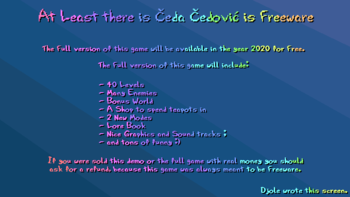 Image that was supposed to appear after completing the game. 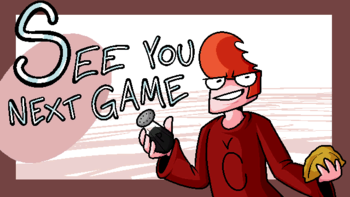 Added in the game's folder as a joke. It's an edit of an ending image from Neighbors in Hell 2: Hardcore. 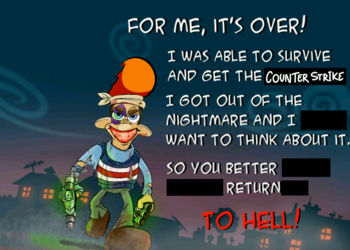 Dialogue for removed NPCs that can still be found in the game's project file (that, again, is not so easy to access).

Schinger: You still need to go find my friends!
Čeda: Did I fucking ask you anything!?

Čeda: You there! Your fucking lead singer says he wants you two in band. If you don't go now, I'll punch you both in the dick. Yes, with one punch.
Drummischt: Yes, I schee. I'll be schure to go to him.
Čeda: Fuck, the whole sch thing is annoying.
Guitarischt: okay, sure. I guess we shouldn't have left him all alone there.
Čeda: Wait, why aren't you- ah, fuck it.

Dialogue after finding all band members

Schinger: Wow, thank you friend, the boysch are all here.
Čeda: Yeah I don't fucking care, give me waffle.
Schinger: Yes, ofcorsche, here you go, friend!

These sprites are located in "npc_djole" image at path Assets/Texture, and were meant to be used in the scrapped Djole mini-game. The second sprite was reused for the Get 2 it level's ending.