An albino xenomorph-like robotic elephant-like creature must swim fly in the air and shoot bubbles lasers at his enemies to accomplish...something. Featuring another cameo by Robo-Bub! This time he sells stuff. 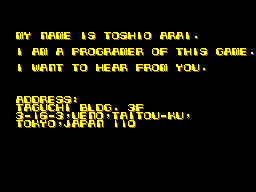 A secret message from the chief programmer, Toshio Arai, can be triggered through the following method:

Flip Dip Switch 2:8 (Service Mode) and Dip Switch 2:7 (The first "unused" dip switch in MAME's menu). Then, exit the service menu. This acts like the similar debugging function in Mutant Night which disables collision detection with certain objects...but it's pretty much useless here, since it only disables collision with power-ups.

There are two extra credit graphics hidden in the object graphics ROM.

The first just gives the game name and the copyright year.

The second is the name of one of the game's artists, Tsutomu Fuzisawa, who has a habit of hiding their name in the graphics of UPL games.

An alternate version of the game logo rendered in block letters. This is absolutely not the correct palette, but the correct one hasn't been found yet, if it even exists anymore.

Simple graphics that mark which background graphics ROM is which.

Alternate versions of two of the shop icons. The early Atomic Power Gun uses a different design, while the early 5-Way Beam is a rough outline of the final gun.