Bakuretsu Muteki Bangaioh is a dual-stick shoot-'em-up originally released as a Japan-only N64 title, and is significantly different in gameplay and script from the Dreamcast release a few months later. Only 10,000 cartridges were released, making it one of the rarest N64 titles.

There are three unused stages. The first two are remarkably similar to two existing stages in the game and contain placeholders for enemies not found in other map files. It is believed these are development versions of those stages.

The final unused stage is a relatively open field and does not contain any of the development placeholders found in the others. It is more likely this was an alternate final stage.

These unused stages do not have pointers linking them to a stage number index, and as a result there are no assigned background images, bosses, or scripts. As a result, the codes listed in each section to playtest each stage will cause each to use the backdrops and bosses of the stage they replace.

No order for these unused stages can be derived. Map stage assignment is completely arbitrary, most likely in the order that they were completed or by internal name. Without any reference for the naming, it is impossible to determine precisely what use each of these originally had.

All stages are built using 8×8 tiles contained in a tileset file. Ordinarily, all objects - your suit, enemies, buildings, items, etc. - are transparent. These tiles simply assign a property to indicate where the object should be loaded.

Prototype stages contained special placeholder images for some of these objects, most likely to aid in placing them. These are either bright orange or bright blue with white highlights when necessary. Interestingly, only your starting location, enemies, items, infostation, and the boss are contained in the placeholder tilesets. Other tiles, most notably buildings, are not included. 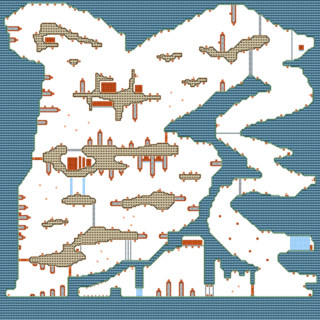 Likely an early version of Stage 12, given the starting location and general layout. The boss is set in a position against the wall, which would imply this was a Koa boss stage. The most obvious modification in the finished Stage 12 is the boss area, which is no longer a corridor but a pit containing a suit. This stage uses placeholder tiles. 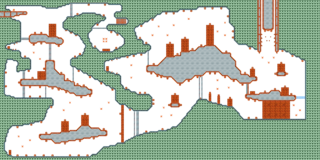 It isn't entirely clear if this stage was a prototype of a final release stage. The boss is again positioned flush to a wall, implying Koa was again the boss. This stage uses placeholder tiles. 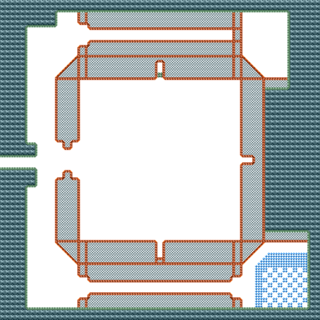 This map is very simple, consisting of only two areas containing some fruit, several lasers protecting those optional areas, and the boss residing in the center of the stage. The boss area locks itself after you enter. For this reason, it is suspected this was a prototype arena for the final boss.

Unlike the first two unused stages, this one does not contain placeholder images for any of the object layer assignments. Also, each object uses only one tile to assign its properties instead of splitting across several tiles, as is the case with the multiple tile placeholder images.