Billy Hatcher and the Giant Egg is a unique platformer that involves using oversized eggs and hatching them to befriend animal friends contained within them. Cock-a-doodle-doo!

There's an unused video in the game's files titled mv_boss_clear7.sfd. It's identical to the first part of the ending, except it doesn't have any audio. This may have been used after defeating Dark Raven, but the ending plays automatically after doing so in the final game. The actual ending movie, mv_ending.sfd has this part baked into it with audio.

An unused fanfare. Considering the name "tosaka" in the filename, it's likely an early version of the fanfare for collecting an Emblem of Courage. The fanfare used is eb_get.adx.

In the stage select menu, the underside of the book that leads to the Egg Gallery cannot be seen normally due to the camera angle. Moving the camera reveals that it is fully modeled and has a unique texture for the cover. 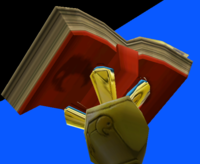 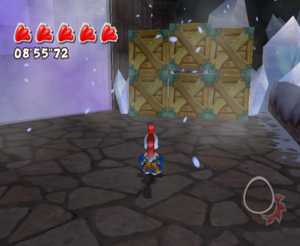 An area of mission 1 in Blizzard Castle contains a stack of crates on top of ice shards. The upper-middle crate is not properly aligned with the others. Since you cannot get to this area in mission 1 and there are no crates at this location in any other mission, it's possible that this level underwent several changes during development.

An icon for a tornado is stored in the same texture as the icons for the egg and foot pads. This may have originally been used in Mission 2 of Sand Ruin to deactivate the fog trap, but the game has a standard switch that must be pushed down with an Egg Driver instead.

If hacked into boss battles, Egg Animals are capable of hurting bosses and deal a very large amount of damage to them. To see this behavior for yourself, use the following PAL Action Replay code to replace all standard eggs with Cipher eggs, then hatch Cipher in any boss battle that has fruit: 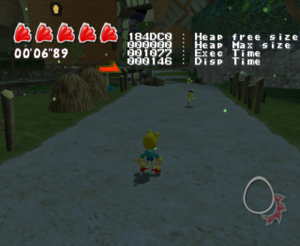 The game has a feature to display a few pieces of debugging information at runtime. 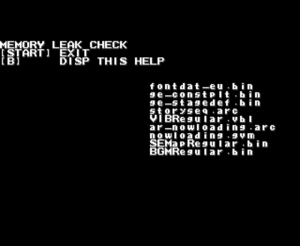 There's a memory leak check hidden in the game. On the right side shows the same list of files featured in the debug menu.

Pressing B toggles rendering the text, and pressing Start exits the screen. It seems to be non-functional in the final build: no additional information is displayed, and no other buttons do anything.

To enter this screen, activate the following PAL Action Replay code, then enter the Egg Gallery from the level select screen.

The egg is rotated differently in the Japanese and international logos.

The technologies screen in the Japanese version doesn't mention Dolby nor the Game Boy Advance connectivity.