This page details one or more prototype versions of Billy Hatcher and the Giant Egg (GameCube).

On the Nintendo GameCube Preview Disc from May 2003 is a playable demo of Billy Hatcher and the Giant Egg. The demo is an earlier build of the game with one playable level, taking place on Pirate's Island. The demo's build date is September 5, 2002.

The demo's title screen uses a static image, while the final's takes place in a dynamic scene. The "Press Start" text is slightly different, and the demo has text indicating it's a demo version.

The demo's logo has a few differences:

Interestingly, the demo's title screen shows Pirate's Island at day, but the only playable level takes place at night.

The ADX logo's colors were inverted, and the logo itself was moved up to make room for crediting Dolby. The prototype is missing the note about the game being compatible with the Game Boy Advance Cable since it doesn't use it. 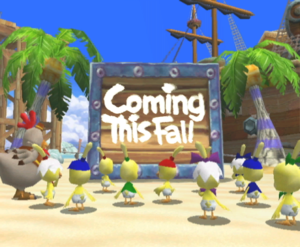 Regardless if you lose all your lives or complete the level, a screen indicating the relative release date (at the time) shows up.

Egg Rings look simpler and don't have spheres or connectors around them.

Textboxes are simpler in the prototype. The indicator to move onto the next box is a double arrow instead of a B button icon.

The B button prompt for talking to characters is simpler and less stylized in the prototype.

Instead of defeating enemies to unlock Uri-Uri's cage like in the final, the prototype has you simply touch an egg pad.

In the prototype, performing an Egg Driver on some eggs has a squish effect that is not present in the final.

The mission cleared phrase is "Mission is cleared" in the prototype. The final removed the "is" and made "mission" larger.

All music in the demo is different than the corresponding songs in the final.

Quite a few differences here. The "la la" vocals are in a different tone.

This song doesn't play at all in the demo. It sounds like an incomplete version of the night theme for Pirate's Island, which is likely why the demo opted for one of the day variants.

A similar situation with this one as well.

The demo doesn't let you explore most of the upper areas due to the second gate remaining closed and there being an invisible wall (as well as no way up) past it. However, using exploits and memory editing, you can reach normally inaccessible areas and explore more of the level. 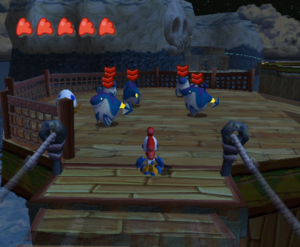 Interestingly, there's an enemy and egg spawn above where the second gate is. It's also right by a bridge. 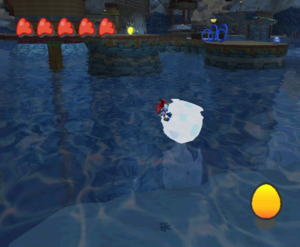 There's oddly an invisible rail in the ocean that loops around the level. Once you get on it, there's no way off, since you can't jump off rails and the rail never ends. 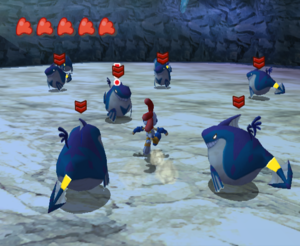 There's an enemy spawn in Skull Cave, but there are no eggs. 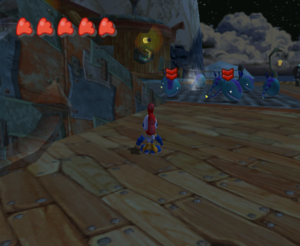 There's another enemy spawn on the island that leads to the Dark Gate in the final. No eggs are here either. 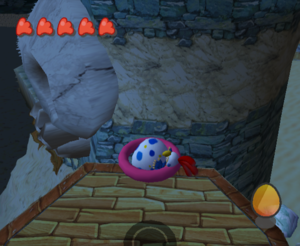 Perhaps the most interesting detail: a pink Egg Ring! It's found on the faraway skull island, and these doesn't exist at all in the final. It acts just like the static orange ones in that it doesn't move at all. When you jump with it, it doesn't even give you enough height to get on the platform above (there's nothing up there anyway). Also on this island are eggs that spawn without nests, which act identical to the ones in Mission 2 of Sand Ruin in the final.

The exit to Skull Cave is slightly larger and has no wooden frame in the prototype. The lanterns are also further apart.

When you enter through here in the prototype and look back into the cave, there's a wall instead of an entrance on the other side. You can still walk through it, indicating that the exit to the cave wasn't complete yet.

All text will be compared with the first mission in Pirate's Island in the final, as that's the only level available in the prototype.

Said by the chick in the red cap. There are several grammatical errors in the prototype, and the prototype mentions only a single pirate instead of multiple.

Said by the chick with the white egg shell over its head, who exists in this level only in the prototype.

The chick in the red shirt, who exists in this level only in the prototype, says how to hatch an egg. There's a slip-up in the last text box, as it repeats most of what was just said.

Said by Menie-Funie when touching the Elder's egg. Since this is the second world in the final game, the text is much shorter. Uri-Uri is referenced in a blue font color, which doesn't happen in the final. Funnily enough, the prototype assumes you will read this text in time and will still trigger the cutscene for the first gate opening if you wait long enough, which allows you to move around while the text is still up.

Said by Chicken Elder Uri-Uri when speaking to him after hatching his egg. The prototype mentions he's one of the six elders in Pirate Island, rather than Morning Land as a whole. Not to mention, there's some Engrish in the prototype as well.

There's a file called GCAX.conf, which looks to be a config file for the AX sound library. This file is not present in the final version.

Also found in the demo's pause menu is a graphic for a menu option called "Exit." Both the demo and the final versions display the "End Game" option for quitting out of the game, thus rendering this unused. This graphic was removed from the pause menu texture in the final.

In the same texture for the "LET'S GO!" phrase shown at the start of the level are graphics for the 'A' and 'R' letters, which go unused.

Contained in the texture for the "PIRATES ISLAND" level title text is an icon for an egg. This is never displayed in-game and isn't in the final.

Retrieved from "https://tcrf.net/index.php?title=Proto:Billy_Hatcher_and_the_Giant_Egg_(GameCube)&oldid=835995"
Categories:
Cleanup > To do
Games > Games by content > Prototypes