This is a sub-page of Blast Corps.

There are three levels that cannot normally be played, as they are used for demos or cutscenes. Regardless, each one does have a proper name and obtainable medals.

This brief level is used for a cutscene where the player can watch the shuttle launching.

The level seen on the title screen. It's a duplicate of Blackridge Works, although a lot of things are different. The moon music plays in this level and the time has been changed to 4 minutes. The Cyclone Suit has been removed and the spawnpoints of the player and the Carrier have been moved. It's impossible to finish the level because the Carrier distance hasn't been changed and the building counter doesn't seem to work. The communication points are useless as they don't unlock any new levels on the world screen. 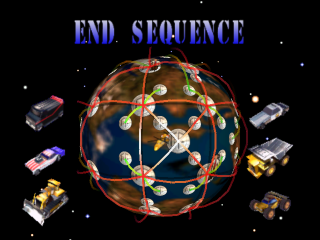 The credits level. The level has many buildings, but there are only seven, actually. This is because the other buildings are part of the map's model. The huge building from Beeton Tracks and the rocks at the end of the level are buildings. There is a toilet hidden behind the rocks.