In Blast Corps, your goal is simple: destroy buildings everything using a variety of unique demolition vehicles to clear a path for a truck carrying a pair of defective nuclear missiles. 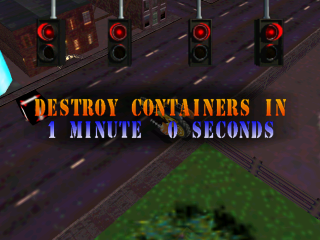 There exists data for a level type where you have to destroy containers like the ones from Oyster Harbor.

Icon ID 0xFC is a duplicate of the Destroy Spheres icon.

Big icons for Cyclone Suit, damage counter and timer exist. They use the same graphic as the normal ones, but they are resized. The unused icons use the IDs 0x27, 0xED and 0xEF respectively. The big Cyclone Suit icon was meant to be used in the Highscore list, but no bonus level uses Cyclone Suit.

An unused vehicle (0x0C) exists. Trying to load it crashes the game as there is no code for it. This slot was most likely used by the removed rescue chopper vehicle.

There is an unused event with ID 0x1F located between the final intro segment (0x1E) and the main levels complete message (0x20). The game will freeze, because there's no text assigned to it.

In the savegame file there are some unused bytes for activated communication points for levels that don't even have one including Diamond Sands, Morgan Hall, Mars and Gibbon's Gate.

The fourth parameter controls the type of a TNT block. 0x01 uses a different texture and 0x02 is an invisible TNT block. In the final game said parameter is always set to 0x00.

This text is assigned to the unused level CMO Intro.

This text is assigned to the unused level End Sequence.

This text is assigned to the building type container.

Assigned to the unused sphere duplicate.

Tons of debug related text. The Missile Carrier is called CMO and pacdozers are known as GHOST DIGGER.

Meant to appear after the WARNING! message, but the final game uses COLLISION IMMINENT! instead.

Text related to the Controller Pak.

This text would have been displayed after collecting all 57 platinum medals, but was scrapped for unknown reasons.

Action themes don't play in bonus levels, which means that there once was a level that used the moon theme along with this unused song. This can be heard in the inaccessible level CMO Intro.

Each carrier level uses two different ending jingles. While the first one is used by default, the second jingle only plays when the player enters the Blast Corps semi at the end of a level. Since the Moon theme is only used in bonus levels, the second ending jingle can not be heard during normal gameplay. Interestingly, it doesn't play in the inaccessible level CMO Intro.

Warning!
Many unused copies of the "Warning!" sound are present in the second sound bank.

What's the matter with you?
This sound is found between "Give me a break!" and "You keep this up!". Where this could have been used is unknown.

There are a few unused instruments, but most of them are just copies from other instruments.

Differences between Blast Corps and Blastdozer

Due to the game's different names, the star has "BD" on it in the Japanese version and "BC" elsewhere.

Due to the game's different names, the Backlash has "BD" on it in the Japanese version and "BC" elsewhere.

Again, due to the game's different names, the semi's logo says BLASTDOZER in the Japanese version.

Once again, due to the game's different names, the platinum medal has "BD" on it in the Japanese version and "BC" elsewhere. 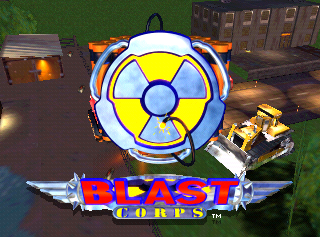 The updated US version patched a somewhat infamous glitch which involved parking a vehicle next to a destructible object/building so the player cannot exit said vehicle (denoted by a "D'oh!" sound when pressing Z to exit). Pressing Z multiple times would automatically destroy the building or object, including those that require TNT crates to be pushed into them. 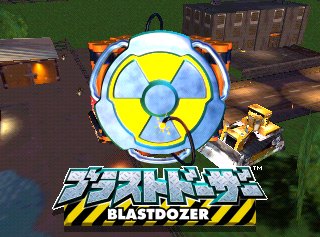 The Japanese version not only patched the Z-trigger glitch, but increased the platinum medal time attack requirements for several levels. Other text and aesthetic changes were also made, although the text scrolls the same speed regardless of language. 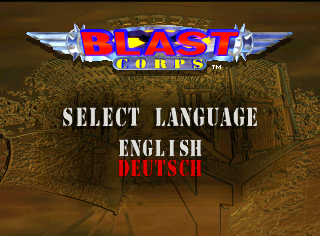 Along with patching the Z-trigger glitch and adding a language select, all medal times were increased by 20% and the game's refresh rate is 20% slower.