Brandish is an odd action RPG, originally developed by Falcom for the PC-98 and FM-Towns, then later ported to the SNES, Turbo CD, and PC (in Korea and Taiwan). A remake was later released for the PSP in 2009. The SNES version published by Koei, however, remains the only title in the series to be released outside Japan. With bland graphics and a confusing interface, it's not particularly well-liked and thought to have sold extremely poorly. Nevertheless, fans of the series appreciate it as a unique if cumbersome take on traditional dungeon crawlers. It also has a typically excellent Falcom Sound Team JDK soundtrack.

Like everything else in Brandish, the Dragon Statue in the fourth area of the Ruins has four different designs, one for each rotation. However, the north-facing design is never fully seen in-game, as it's almost completely obscured by a wall. Furthermore, it can't even be seen by disabling graphic layers in an emulator, as all the background tiles are on a single layer. It is, however, part of the Ruins tileset, and is always loaded into VRAM while in the Ruins.

As stated above, everything in Brandish has four different graphics for different rotations. It's commonplace to be able to see the sides of chests, and on occasion, it's also possible to find chests sitting in the middle of a room, as opposed to against a wall, allowing the back to be seen. However, the Dark Zone is an exception. Being that this is a very tiny area, there is never a point in which you can fully see these frames; even the side views of the Dark Zone chests are obscured by walls. Moreover, only the upper two 8x8 tiles of the upward-facing chests still seem to be in the ROM, the lower tiles seemingly having been erased when the developers realized they weren't going to be used.

There are two places in the second area, the Tower, in which items are stashed between pits and solid walls. It's possible to jump to the platforms they're sitting on, but as you must be facing, but not on top of, item bags in order to collect them, there isn't any way to do so. Nevertheless, these do contain items, and can be collected with the use of a walk-through-walls Game Genie code: DD3E-3DD3. They're not very interesting, however. 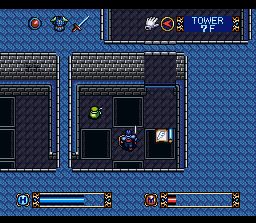 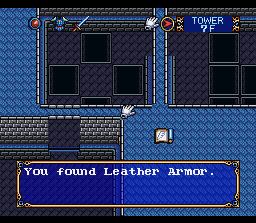 The first inaccessible item bag is on the seventh floor, and contains a suit of Leather Armor, which should be quite useless at this point in the game. 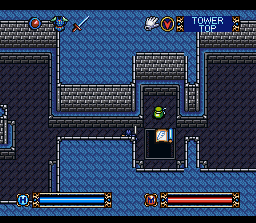 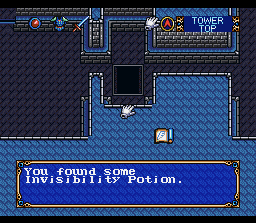 The second (and last) inaccessible item bag is on the Tower's top floor. It contains a two-use Invisibility Potion, a common item no more worthy of being made unobtainable than the Leather Armor above.

There are a handful of places that cannot be reached by any means other than using the walk-through-walls code mentioned above. Most appear to simply be filler, but are interesting nevertheless. 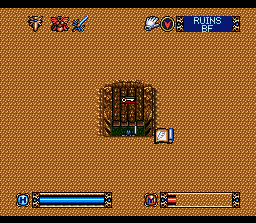 The first of several instances of tiny inaccessible rooms behind shops containing "back doors" can be found in the "basement" floor of the Ruins. This one in particular is hidden behind, and leads to, the sound room. 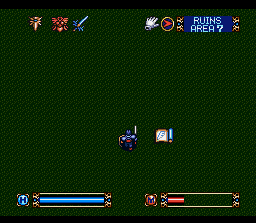 Only half of the seventh Ruins area is actually explored. The other half can be reached with said walk-through-walls code, and is glitch-free, but is entirely empty. 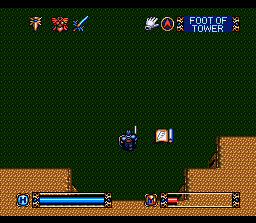 More empty space. Only the central part of the final section of the Ruins is normally accessible, with the north and south areas being devoid of content entirely, yet still existing in a fashion. 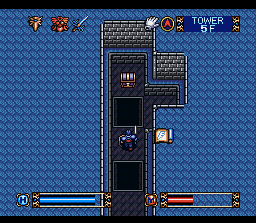 At one point during the ending montage, Varik is shown traversing a long, narrow hallway, jumping over pits, before finally landing in a hole right in front of a treasure chest. Unlike most of the areas shown in the ending, however, this hallway is completely inaccessible during normal gameplay. Nevertheless, it does exist, in the upper left corner of the Tower's fifth floor. There are no doors, breakable walls, illusion walls, or warp panels, and you can't fall into it from above, so the only way in is through a walk-through-walls code.

Strangely, despite being seemingly just for a cutscene, this room is partially active: the treasure chest (which is itself unobtainable without more wall-walking) contains a whopping ten Gold Bars, and the second pit from the top drops you down to the fourth floor. 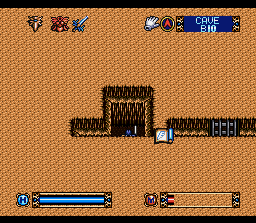 Another instance of a tiny room behind a shop, this time in basement 10 of the Cave. Oddly, this one is not right behind the door, although the door is visible nearby. 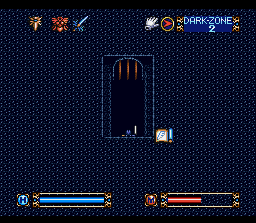 The last of the "back doors", this one is behind the sound room near the very end of the second part of the Dark Zone. 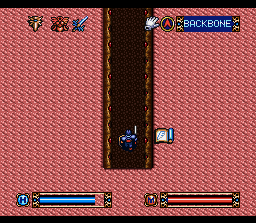 The Fortress Backbone, a tiny optional area where you can fight the Bezalhydra and claim the game's best weapon, has two long, narrow hallways running parallel to the boss room. They're both completely empty, and their purpose is unknown. 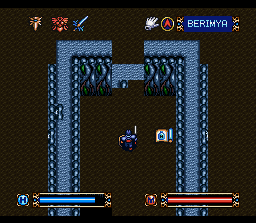 Another instance of an ending cutscene area existing out of bounds on another map. The long, dark hallway Varik walks down after beating the final boss can be found on the left side of Berimya, site of the final battle. The hallway itself actually uses the Dark Zone tileset during the ending scene rather than the Berimya tileset, resulting in a rather glitchy look if visited via cheats. Interestingly, the door at the very end is actually depicted on the minimap.

The opening theme was completely changed for the North American release. While the exact reason for this is unknown, it may relate to a case of (presumably) accidental copyright infringement. The introductions in the original 1991 releases for PC-98 and FM Towns, as well as the ports to Turbo CD and SNES released in June 1994, all used minor variations on a theme generally known as "Opening". It was eventually noticed, however, that major parts of the song seemed quite similar to a 1939 composition by celebrated Spanish musician Joaquín Rodrigo - specifically, the second movement (Adagio) of his popular Concierto de Aranjuez, which apparently got such widespread exposure that some people assumed the section must be a much older song (and part of the public domain).

While the exact sequence of events (as well as how the infringement happened) can only be speculated about, what is known is that the North American release of the SNES port debuted in February 1995 with a brand new opening theme, and the enhanced "Renewal" version released for PC-98 in October featured yet another new theme, "Prologue". The latter would eventually be arranged into "Tradition" for the first part of the PSP remake's opening, as well as weaved into several other song arrangements in the title. Meanwhile, the composer of the new SNES opening remains unknown, and it has never been used again.