This page covers bugs found in all three versions of the game. Bugs specific to certain versions are specified.

When weapons roll for damage (auto-attack or arts), they cannot actually reach the weapon's maximum damage value: it can only be between [minimum] and [minimum + 99] (inclusive). This makes weapons with a wide range of damage much worse than advertised, and renders Attack Plus gems (which raise maximum) almost useless compared to Attack Stability gems (which raise minimum).

If you have 99 of any given key item and attempt to obtain another copy, the game will be softlocked, as you must take the new key item but cannot delete the old key items to make room. The only key item you can gain infinite multiples of normally is the Strong Lubricant Oil.

Tephra Cave, the second map in the game (outside of the prologue), can be logically divided into three parts: the main part of the cave is initially blocked by a red-lit door which unlocks shortly after by proceeding with the story, while a large bonus section is unlocked in late-game events. The game also rewards the player with experience for completing missions and discovering named locations: like in Pokémon, the experience-to-level conversion is not linear, so the rewards are larger for content intended to be obtained later.

Taking advantage of the imperfect solidity of the door, as well as the ability of the three active characters to push each other around if crowded, it is typically possible with a few minutes of effort to enter the second section early.

While the above trick does not allow for skipping those early events (as the player will meet a spider web that is not passable with that same method), they can reach the floor above Vilia Lake, wait for a Pond Skeeter on the lower level to come sufficiently close to be tauntable, do so without starting the battle (which would disable jumping), lure him next to an one-way jump from the endgame section of the cave, and jump in place, hoping for the knockback from the monster's attacks to push them up.

The player will that way have access to the third section. Further, as the game does not spawn enemies in that area until it is unlocked, the player is free to almost fully explore it, claiming high-level Ether Crystals and the above-mentioned experience rewards before using the map to return to the first section of the cave and continuing normal gameplay.

Note that this trick cannot be reasonably done later in the game (as the characters will be too strong to not defeat the Skeeter quickly) or during a section of the story where the player cannot warp.

For unclear reasons possibly related to a memory leak/long playing sessions, characters may spontaneously lose their voices. If this happens, the game will hang if a chain attack is attempted. Saving and reloading the game will correct the issue.

While both the door glitch and the range of the enemy were fixed in the remake, it is possible to glitch through a floor/wall if a CPU player is climbing a wall, the player is running against the wall to pass, and the active character is switched with the former. Done in appropriate places (i.e., backtracking from the Arachno Queen's Nest and holding the joystick towards top-left), this can also allow for reaching the last section of Tephra, as well as the High Entia treasure room along the Sororal Statue's elevator.

Unlike its equivalent in the older releases, this method can be done at pretty much any progression through the game.

Battle Music Outside of Battle (Switch)

While many enemies attack on sight, some (called Scouts) will instead run away and return after some time with reinforcements (if not taunted or attacked before they reach them).

If in the meanwhile the player teleported elsewhere (on a map where doing so is possible with actual world features), battle music may start to play and override the normal world music until the player moves to a different one.

If a battle is won by CPU characters while the player is dazed (yellow star status effect), there is a chance of the battle not terminating, hanging the game.

Characters ordinarily earn one Affinity Coin per [maximum] level-up, plus one per Unique Monster defeated the first time, coincidentially allowing for a maximum of 255 coins. It is also intended that, when starting a New Game Plus, the latter coins can be obtained again, eventually reaching the cap of 999 coins after a sufficient number of chained playthroughs.

However, for unclear reasons associated with the use of Expert Mode to reduce levels below the maximum unlocked, the amount of coins may underflow when doing so.

The cause was allegedly fixed in game update 1.1.2. 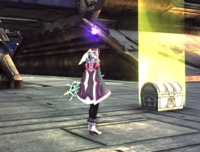 A bolt hanging around while no battle is active.

In some circumstances, elementals summoned by Melia do not go away when a battle ends. It is believed this has to do with the summoning art being interrupted at a certain time by something like a chain attack starting. The elemental remains active until it is used in battle, or a battle ends and it is properly disposed of.

If a character's total Spike Defence (from gems and skills combined) exceeds 100%, then counter spikes will heal them instead of damage them (e.g. at 105% defence they heal for 5% of the spike damage).

Normally, Melia's talent gauge is lowered to 90% if combat ends when it is full. However, the Channeled Pain skill link from Reyn (or Glorious Future from Shulk) allows it to fill to 100% without engaging in battle (e.g. from luring an enemy but not drawing weapons). From there, putting Melia in an AI slot and initiating combat will instantly activate her Elemental Burst aura, and she'll begin combat by summoning an elemental. If the player immediately disengages, swaps Melia out of the party before she's finished the summoning animation, and then puts her back in the player slot, her burst aura remains active indefinitely. This can be abused with an Aura Heal gem (and usage of Expert Mode) to wander forever through damaging terrain without dying.

In the original version, the battle menu is too slow to put away to access the party menu in time to set up the glitch, so it's unknown whether it's also present there.