A cursor pointing downward. A similar cursor appears (and is used) in the first game, but it points up instead. 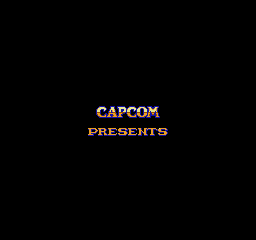 The Japanese version of the game has an exclusive "Capcom Presents" Screen that isn't present in other versions. The graphics still exist in international releases, but are unused.

As a result of this, more info was added to the "Produced by Capcom" screen. The "/" character went unused in European version of the game.

The title screen was touched up a bit for the international versions:

The boss of the Port has solid blocks underneath the lamps in the Japanese version.

The bricks on the Stage Clear screen were replaced with plain, diagonal, periwinkle stripes. Also, shadows.