A well respected cult-classic, Clash at Demonhead is an extended platformer more commonly known as a "metroidvania" these days.

The following password maxes out everything that can be maxed out in the Japanese version. Items, health, money, absolutely everything! Likely used by the programmers to test things out. In Japanese it would be written ("Tensai wa wasureta kotowo omoidasu yo"「天才は忘れたことを思い出すよ」) and means "(I) remember the things the genius forgot".

The US version has all passwords be two characters shorter, and since this secret password is the same here, it only lacks the last two symbols ("TENSA IWAWA SURET AKOTO WOOMO IDASU"), but can be used as well.

The title screen got a complete redesign. 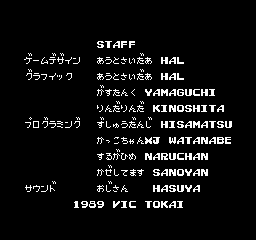 The Japanese version contains a staff roll of the game designers. It was cut from the North American version, possibly because it was mostly in Japanese.

The internal ROM header in the Japanese version, Dengeki Big Bang!, identifies the game as "BIG VAN". The US version has the name as "DEMON HEAD", and also includes the original Japanese version header at the end of the second-to-last bank.