A piece of software where you record gameplay on max settings and brag about how overpowered your PC is. Oh, and it's also a game. 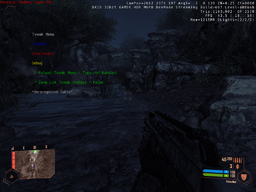 Starting the game up through the command line prompt and typing in -DEVMODE when booting up the game will start up a developer's mode.

While in this mode, icons will appear on the top left corner of the screen, showing when the game is saving data.

The developers made the game check the executable to see if anything was altered. If it was altered (for example, by a NoCD patch), at the start of the second level, your guns would shoot chickens.

O'Neil and Psycho talking about the good old times, but it was cut for no apparent reason.

Presumably, this would have been said after Psycho does a sneak attack on General Lee. However, it might have ruined the pacing of the scene.