Darklands is a sandbox RPG for MS-DOS. It is set in 15th-Century Germany, with every legend and superstiton being true. Alchemists sell philosopher's stones and create gold, kobolds and dwarves infest mines, a horned god hunts schrats and holtzfraus, witches steal unbaptized babies, dragons ravage the countryside, and demon worshippers plot something sinister.

The game was one of the earliest examples of "real time with pause" combat system later made famous by the Infinity Engine games — the player gives orders that are then clumsily executed by the AI in a real time environment with internal turn counter. Also it had one of the first computer-exclusive RPG mechanics not burdened with limitations of pen-and-paper games — half a decade before Fallout's S.P.E.C.I.A.L.

This section lists the texts not intended to be seen by player in the last released version.

The game designer Arnold Hendrick mentioned in interviews disabling several half-finished buggy subplots due to time constraints. Looks like a lot of text was left from large plots about wars between German states and a city revolt.

Some versions of the game allow to adventure in the current city, but display a quiz in alchemical symbols when you try to leave it. Loading a game saved in the wilderness gives such a quiz immediately. Other versions seem to have a time limit, displaying the quiz after a number of game days elapsed.

Since the symbols are a common knowledge (at least if you are interested in the medieval history of chemistry and astronomy), the manual wasn't that necessary.

In at least one interview Arnold Hendrick, the chief designer, stated that they tried not to remove any unused graphics for fear it might be accessed by some code, which will crash the game. Which never was very stable, anyway. Instead they tried and repurposed mostly everything. Still, buttons, menus and other interface elements are harder to repurpose that background artwork. Some do remain.

The manual states that the game has a hall of fame, but README.TXT states it does not. Here are some leftovers from when it did.

There is an unused 320x200 image PICS\FAME.PIC, similar in style to the title screen: 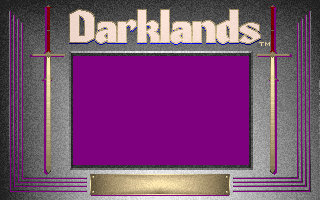 The purple colour looks out of place, but this is the palette inside the FAME.PIC file. It may have been a glitch or it may have been intended for some visual effect like a palette swap animation. PICS\STARTSCR.PIC has similar purple lines, but the game displays it with a different palette, making them black.

PICS\STARTSCR.PIC is used for the main menu. It has 3 buttons: "Quickstart", "Create a New World" and "The Story Continues". The pressed state of those buttons is in files PICS\BUTTON1.PIC, PICS\BUTTON2.PIC and PICS\BUTTON4.PIC. But there's also unused PICS\BUTTON4.PIC:

This PIC file has no palette. The uploaded PNG uses the palette from STARTSCR.PIC, which isn't exactly how the game displays the starting screen.

The tiles for wilderness are stored in PICS\MAPICONS.PIC and PICS\MAPICON2.PIC. However, there's some text outside the displayed tiles: 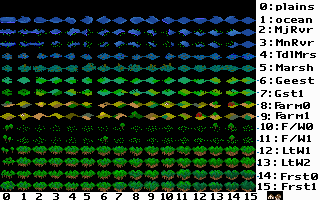 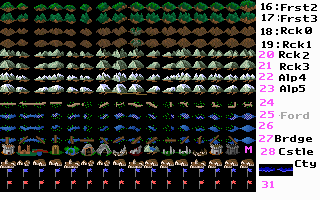