Quantrite is a cut crafting material. It was accidentally showcased in the Mineral Trade screenshot on Update 12's Steam page, shortly after it was replaced with a new screenshot where the resource was removed. While this resource was fully removed from the game's files during Update 14, it has made a peculiar return with the release of Update 34 but still wasn't added in the game.

Crafting resource that was present during Regular branch testing and removed at some point for unknown reasons. Alternative icon still exists in the game files. This mineral's appearance is quite similar to Bismor, and was likely renamed to Bismor. However, since there's evidence that it appeared in Sandblasted Corridors, it is possible that the Sandblasted Corridors had Bismor instead of Magnite.

Unknown resource, only an icon can be found in the current game's files. Due to the way it spawned and it's appearance, it was likely used to test crafting and used as a material within a game.

Bittergem used to reward the dwarves with 300 credits upon depositing and was originally colored pale yellow similarly to Compressed Gold chunk.

Unknown resource, a small trace can be found in 2015 early build's files. This was a very early version of Aquarq and it had a very similar model.

Was a non-linear Mining Expedition mission type that was eventually merged with Egg Hunt. Removed in Update 18.

Was a linear mission type, these missions were exactly like Mining Expedition but Morkite mining was replaced with 10 Alien Eggs. Removed in Update 18.

Milestone icon still exists. Presumably the headlights would be disabled throughout the mission for the dwarves. 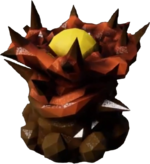 A strange parasite, from the game files it's suggested to be squishable. It's one of the creatures from the BET-C's concept art, suggesting this was the early Xynarch Charge-Sucker's appearance at one point. 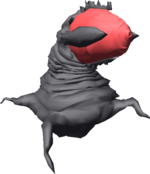 Large plant with an oval shaped head. Suggested to be a plant which would suck in dwarves, an animation of the 'head' opening up with an air sucking animation is present. 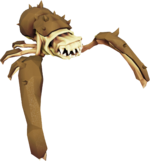 Acted exactly the same as a Glyphid Grunt but would have 50% more health and tougher armor.

This unfinished creature is using the Glyphid Praetorian model as a placeholder and swiftly charges at any nearby dwarves but fails to do anything besides printing out "Hello" message in the console. There's some concept art available possibly suggesting the creature's intended appearance.

This unused creature's skillset consists of: acid spit dealing much more damage than usual and leaving a toxic gas cloud for a limited amount of time, summoning many Glyphid Acid Spitters when the creature's health reaches 50% and constantly digs underground. This creature when summoned in-game is very buggy and unstable, which often results in a game crash. Some ideas of this creature were re-used for the Glyphid Menace.

Some sort of an unfinished flying variation of a Glyphid. Was possibly used as a test of an flying enemy before Mactera was added into the game. 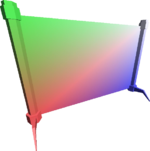 A strange wall blueprint is visible in the developer vlog #4, traces can be found in the game files. This would've been possibly a new supply drop or an engineer building which could be used to block/distract enemies.

Some sort of rope based equipment, files suggest one end could be something similar to Grappling Gun or Zipline Gun. Possibly a tool the developers experimented with which allowed the user to fire a rope up a cliff, acting like a traditional grappling hook. 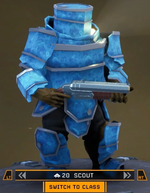 It was an armor made out of barrels which were class colored. This was only present in the Experimental Branch and possibly made as a joke by developers. 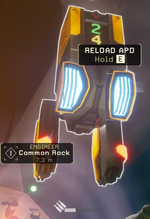 Would've had a limited ammo pool which could be refilled. A yellow counter appears on Bosco's back indicating how many ammo refills are remaining. This counter can be increased only up to 2 refills via taking a Resupply Pod.

Originally players shared 50% of their health every time they revived an incapacitated teammate. This was only present in the Experimental Branch.

Finding Error Cubes and Bittergems used to count towards a milestone.

There's an entire folder dedicated to refunds, seems like vanity items and upgrades were planned to be refundable. It is possible this system is used for when upgrades are re-balanced.

There's various models of strange machinery that are still unused, some of the models are used in the Space Rig and Salvage Operation. Machine Events may be a form of the original "Abandoned Structures" idea. 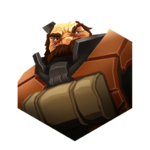 There used to be a fifth class used purely by the developers for testing purposes. This class would carry every single weapon and tool in their inventory. Icon was taken from the old artwork.