On July 25, 2020, a large amount of internal data owned by Nintendo was leaked to the public, apparently originating from either iQue-owned servers or a backup of them. This was a result of an earlier server breach in 2018 which resulted in the leaking of other assets, including but not limited to the Spaceworld '97 and Spaceworld '99 demos of Pokémon Gold and Silver.

assets\en\gfx\nigen_i\multigen\DEMO\DEMO_Rogox4.c is an early logo, also utilizing a subtitle: "The Cosmic Crisis".

assets\en\gfx\nigen_i\multigen\MAP contains two files: MAP_fox01.rgb & MAP_fox02.rgb. These images seem to be an animation of Fox McCloud talking. It should also be noted that these textures are found within the same folder as images used on the planet selection screen, indicating this animation may have been used on the map screen, potentially during the small cutscene where Fox McCloud is talking to General Pepper before starting a level.

assets\en\gfx\nigen_i\multigen\MAP also contains MAP_Icon_01.rgb, which is a crude drawing of Peppy. 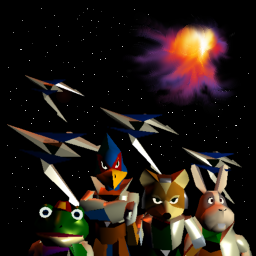 assets\en\gfx\nigen_i\multigen\TITLE contains TITLE_Team.rgb, which seems to depict an early title screen render with Arwing models reminiscent of the SNES game. The artwork can also be found in the same folder separated into 32 different images.

Present in assets\en\audio\BGM_kondo\Seqs\atack.mid is a remixed boss battle track from Star Fox. This song and its instrument bank never made its way into the final game. Some of the instruments in this render were guessed as they did not correspond to its instrument bank correctly.

Found in assets\en\audio\SE\aiff\Player_SE, coin.n.32.c4.aiff is an early version of the coin pickup sound featured in Super Mario 64.

Found in assets\en\audio\SE, this audio file is a 1 minute extract from an unknown Japanese TV Show with an audience.

Found in assets\en\audio\SE\aiff\Longvoice, this audio file is an early and unedited version of the opening prologue, featuring the voice actor reading "Star Fox Opening Prologue" before starting. It is currently unknown if this differs from the final Japanese version.