This is a sub-page of Development:Super Mario 64 (Nintendo 64). 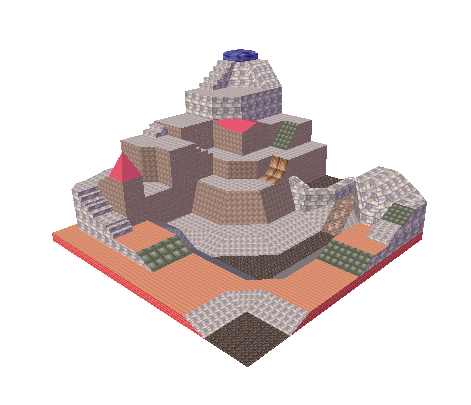 sm64/map/stage1/castle/castle_shape.sou is a scrapped stage briefly seen in a Japanese Nintendo 64 promotional video from 1995. If the map and its object data are loaded into the retail build of the game, a textureless water plane is put in the channels on the bottom of the level, which is caused by the level utilizing an outdated version of the water system.

There's a clone of the level in the stage99 folder which seemed to have been used as a test level (which originally was stage37, but it got replaced with another test level) where single coins are placed sporadically around, with a Power Star also spawning on the top blue platform, just outside of Mario's reach (though this may be due to physics differences in the final build compared to the demo). 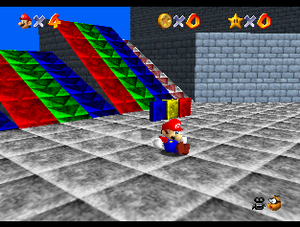 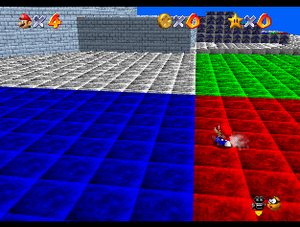 What appears to be a terrain/movement testing level, found in sm64/map/stage2/test/test_shape.sou. According to the graphics files, this stage is called "athletic". There are slopes of varying degrees placed about, different colored floors corresponding to different terrain types, and a spot with no floor, possibly used for testing the effects of exposed ceilings or perhaps intended for a cannon. The graphical stage does not completely match its collision, as a few areas contain invisible floors. No objects are present in the course or its files. The surrounding area off the side of the stage is made up of lava. 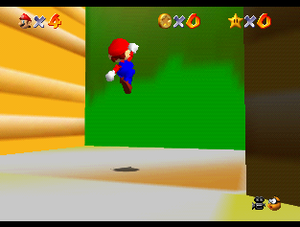 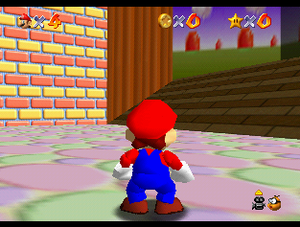 Appears to be some kind of dungeon or hub level, found in sm64/map/stage3/donjon/donjon_shape.sou. It's referred to internally as "donjon", which means a great tower or castle. The stage consists of several different rooms and hallways with seemingly random textures placed on the walls, floors, and ceilings. The general size of the level seems to be larger than areas in the final game, with large slopes and high ceilings. No objects are present in the course or its files.

Stage32 has several different models and data files associated with it, suggesting that its contents would be swapped out for testing various things. This is further supported by checks within the game by a few objects to behave differently if the current level is stage32. stage.dat contains object placement data for various switches, item boxes, pushable blocks, and enemies that Mario is able to grab, such as Chuckya, the Monkey, and the unused Motos. The placement of many item boxes in a row makes it somewhat similar to a test level found in the DS version. Based on the numbering of the test map files, there were as many as ten test maps that would have been used in this level slot. It is also refered to as YAJIMA_LAND, in include/yvals.h

Features a plane with a block Mario can push. 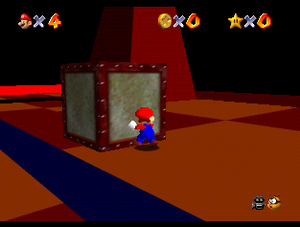 The map located in sm64/map/stage32/stageyj/testmap2 features a raised checkerboard platform. 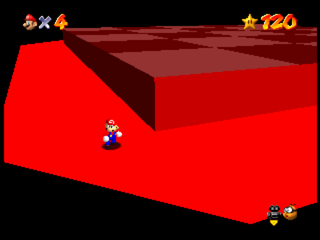 Similar to testmap2. Mario stands in the midst of a flat checkerboard plane in sm64/map/stage32/stageyj/testmap10. 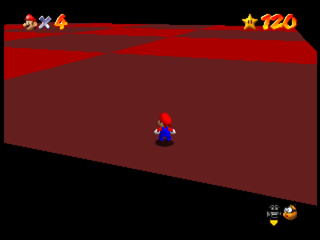 It appears to be some sort of grey colored triangles with some orange checkerboard square and only one colored blue in the corner. There is no collision data for this map for Mario to stand on. 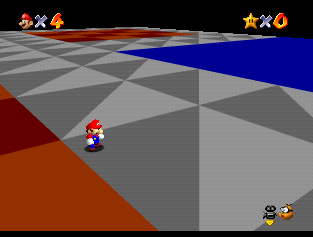 Consists of a flat ground with a green and white checkerboard pattern. This stage seems to have been made to test movement and not much else, due to the simplistic design. 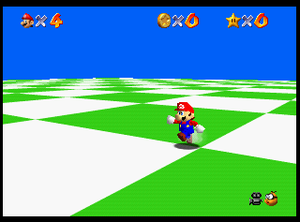 shape/EnemyTest/old/plane.sou is a plane that was used to test physics and enemies. There are two collision models for this, one in stage37/stage37.flk (the latter image), and one in shape/EnemyTest/old/plane.flk (the former image), which means that it used to inhabit stage37 as a test level. The model is dated sometime before January 18, 1996, as stage37 was removed that day. (The latter image is a reconstruction, as there are no display lists present for it.)

Stage37 is called "IWtest" in the source code. 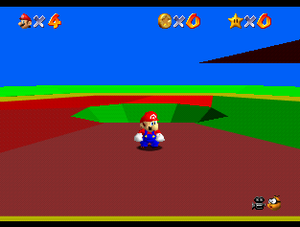 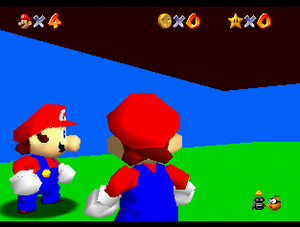 Found in sm64/map/stage38/sand.sou, the stage consists of an octagon-shaped area with sand in various areas, a hangable ceiling, and a mirror for Mario's reflection. In addition, the object script for the stage has two coins with the warp behavior that teleport Mario to each other placed in the stage. Based on a unused dynamic audio file it's source code name (scn_msc_cavdg), originally this slot belonged to a scrapped stage known as Cave Dungeon, the only other mention of Cave Dungeon is the track name for the Underground music from the "Super Mario 64 Original Soundtrack".

A copy of Stage1 with a Power Star on top of the stage, it would be reachable if Hoot's Egg still functioned.

Nothing special here, just a removed stage object model that covered the entrance to the slide.

What is supposed to be a transparent crystal barrier in BITDW, it references a deleted texture and is in the position where fences are in the final. Interestingly, it uses vertex shading as coloring, and has the same transparency as the other crystals.