Dirty Pair: Project Eden is a sidescroller (very loosely) based on the anime movie of the same name. It was released exclusively for the Famicom Disk System and is the only video game based on the Dirty Pair series.

After the game has been paused for around 20 minutes, 23 seconds (or by setting $6187 and $618D to 01), a long beep will play and a telephone ring will repeat indefinitely. Programmer Yujix Terada did similar things in Taito Chase H.Q. and Gokuraku! Chuuka Taisen for the TurboGrafx-16/PC Engine. 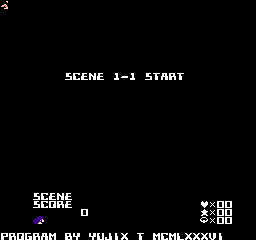 Yujix Terada also "hid" his name at the very bottom of the screen during gameplay. Most NTSC televisions at the time would cut off this part of the screen. Curiously, the Roman numeral says 1986, even though the game wasn't released until 1987.

The text was seemingly removed from the Disk Writer version of the game, though the ringing telephone remains.