A port of the arcade driving game that involves chasing criminals and ramming their vehicles until they burst into flames.

This Morse code message plays in both versions after the game has been paused for around 10 minutes and 45 seconds and repeats after waiting the same amount of time. The message uses Morse code abbreviations.

A longer Morse code message can also be found in Gokuraku! Chuuka Taisen. In that game, Yujix "JN1KTJ" Terada is credited as the programmer. He was also the programmer for this game.

The following date and names are found only in the US version at 1D35. Isao Mizuguchi and Noboru Koshinaka are credited as "sound staff".

Even more Morse code can be found at 3F123 in an unheadered ROM:

The following string is found right after the Morse code at 3F233 in an unheadered ROM. The Japanese text translates to "Koshinaka".

The following string is found only in the Japanese version at 3F533 in an unheadered ROM. 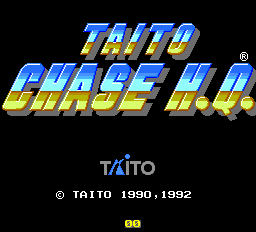 On the title screen, press Left, Right, I, II, Down, Select, Up, Select, then any direction on the D-Pad.

On the title screen, press Right, I, Left, II, Up, Select, Down, Select, then during gameplay, hold Up+Right and press I+II+Select to skip to the next stage.