The NES Dragon's Lair is a rather underwhelming platformer based on Don Bluth's famous Laserdisc game.

While the US version uses a 128KB ROM, the Japanese and European ones use 256KB ROMs. As a result, the latter two have a lot of unused space filled with garbage, leftovers from MS-DOS executables, and more.

Still, there's a lot of source code within said garbage.

The Japanese and European versions contain different portions of their source code which can be compiled into one huge file, covering almost all of program banks 30-39. There are some differences between the two versions, and it appears the Japanese one was done earlier.

Framerate improvements aside, several notable differences exist between the US/Japanese and European versions of the game.

These screens were added to the European version and appear as you enter each stage. Oddly, the dungeon does not have one. The splash screen for the Entrance Hall depicts a boss that was added for this version, detailed below.

A giant snake boss was added to the European version, which replaces the multiple snake enemies at the end of the Entrance Hall. The boss shoots projectiles either directly at you or towards the floor as you try to hit it in the face.

For some reason, this spider enemy only appears in the European version. Touching it is an instant kill. Only seen in the Entrance Hall. They replace some of the snake enemies from the US version.

In Entrance Hall, Bats fly out of the openings in the US version, while the European version uses flying insects of some sort. 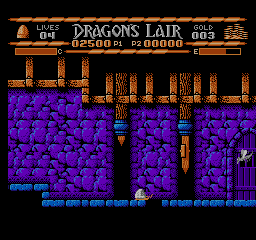 When Dirk gets flattened in the European and Japanese versions, you get a unique animation of him getting stuffed inside his helmet with only his feet visible and walking around for a bit. In the US version, you get the usual skeleton death for everything. 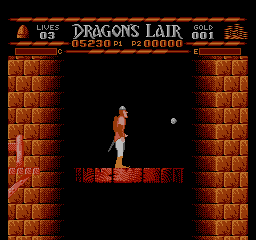 The European version was made a bit harder here with added projectiles flying around the elevator shaft. Touching one is instant death.

Here are the notes from that bar written in MML for easier understanding,

There were a couple minor tweaks to the high scores between the US, European, and Japanese versions.

The Japanese and European version uses an MMC3 mapper. As a result, the game is more responsive compared to the US version which uses an UNROM mapper.

The European version uses "B" button to jump while the US and the Japanese versions use the "Up" button.

The grammar was changed between versions.