Despite the Famicom version of the game being released as "Dragon's Lair" (ドラゴンズレア), this version was released in Japan as Dragon's Magic (ドラゴンズマジック), perhaps to communicate that it was not a port of the arcade game. 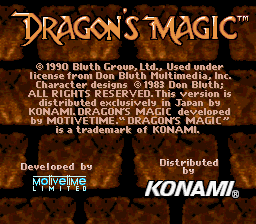