Dragon Saber is a vertical shooter game about two dragons in quantum states of beheadedness. 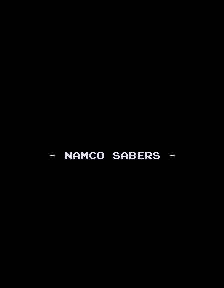 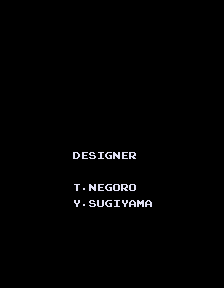 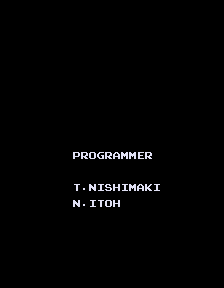 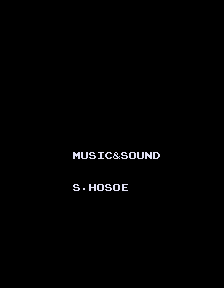 Unlike the normal set of credits, the people credited here use their real names:

On the title screen, press 1P Button 2, 1P Button 1 x10, 1P Up, then 1P Left x5 to set the game to debug mode. This normally does nothing, but if certain dip switches are set... 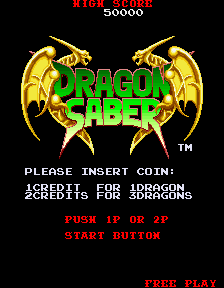 Sets the game to "Free Play" mode and gives both players infinite HP.

Prints a string of repeating characters (Goes from at least A to E depending on the game mode) on the third line of the screen, followed by a sequence of red numbers (Or, sometimes, nothing) below the letters. This is then quickly cleared before the frame updates, so it's never visible to the player. It's not clear what this is supposed to represent.

Press 2P Start to freeze the game, then press 2P Start again to advance to the next frame. Turn the dip switch off to resume normal gameplay. 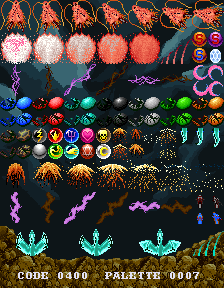 Start a new game to access an object graphics viewer. Press 2P Up/Down to cycle through object graphics, and 2P Left/Right to change the object palette. The only way out of this viewer is to reset the game. 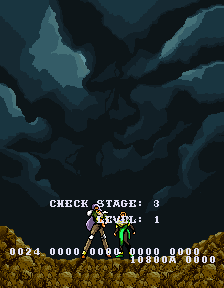 The object viewer takes precedence over this stage select, so turn off Dip Switch 6 beforehand. 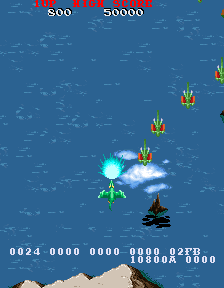 The memory check is in the bottom-right corner. Press 2P Left/Right to move the cursor and 2P Up/Down to decrease or increase the address, respectively. Invalid addresses (0x020000 to 0x0FFFFF, 0x110000 to 0x11FFFF, 0x4C0000 to 0xFFFFFF) will display "CANT" in place of the value. It was probably possible to actually edit the values in the memory check at one point, but not in any of the released versions. 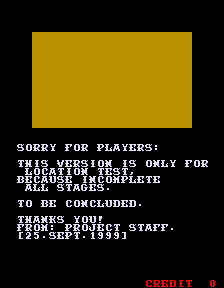 Message IDs 22-2A are text for a location test version of the game - note the "1999" typo. Unfortunately, the code that would display this text isn't in any of the retail versions, though thankfully the formatting and positioning of the text is intact; it's formatted like the text in the prologue and ending.

At 0x05E82 in the main CPU is a list of Atari games that Namco published in Japan. A few of the names are strangely romanized, with "WAR LOAD" (Warlords) being the worst. These games might have been intended to be placed in the "HISTORY OF NAMCO GAMES" section of the credits at one point, but the text as it is in the ROM isn't properly formatted to display in-game.