This is found with the rest of Alex's sprites.

Alex sliding down... something.

The enemy in the green suit was supposed to jump! Unfortunately, the jumping couldn't make the final cut.

There were originally going to be cutscenes after just about every world, as implied by the sprites and load of cut dialogue. In the final, the only cutscenes remaining were after the first and last bosses.

The enemies were supposed to have stuff to say! They don't make any appearances in the two cutscenes that remain in the final.

A series of exchanges that was supposed to be used in a cutscene that shows how Alex got into the night club. The term "XJ9" is a small reference to the Nickelodeon cartoon My Life as a Teenage Robot. The last bit of dialogue is for when the player presses Enter during the cutscene to skip it.

This would take place after the boss in the night club. Once again, the last bit of dialogue is for when Enter is pressed to skip the cutscene.

This cutscene calls the world that takes place on the ship "S.S. Evil". In the final version (at least in the Android version; the PC game does not show world names), this world is known as "S.S. Doominator". The last bit of dialogue is for when Enter is pressed to skip the cutscene.

A cutscene that doesn't even have an order number and is an even earlier version of Cutscene 3.

There are cameos by several characters, and for the most part, each character says a unique line when you approach him or her. However, a few are completely silent. Fewer originally did have lines, but were cut because the characters they're assigned to are located at the very bottom of the screen, which would make the dialogue box obscure portions of the cameo sprites awkwardly if they were implemented.

Arin and Danny from Game Grumps make a hidden appearance in the game! This line in particular pokes fun at when Danny and Ross played Default Dan. Arin doesn't even have a dialogue box, implying that the reason for not implementing these in-game was settled before then.

This is for Jacob, the guy found in one of the last levels. He's located in an area with spike balls and red coins, so that's what the dialogue complements. Interestingly, Jacob himself is from a game the developer cancelled early in development.

Dialogue for Sky Man, who can be found in the caverns.

It's a cup supposedly containing beer.

The beer itself. This, along with the cup, was meant to simply be an animated decoration.

A "Crony" television. The Popp Stars band was supposed to appear onscreen.

A platform that appeared in an earlier version of the levels.

This pair of walls was going to be used in the boss battle! The level would scroll back and forth as the boss attacks.

Two MIDIs can be found in the game file. They were used as placeholders before MP3s were added in as the soundtrack.

A MIDI of the Lava Powerhouse music from Sonic Spinball.

A MIDI of Journey to Silius.

The main logo underwent a couple changes during development.

Used in a demo version of the game, of course.

Text telling you to pick a level.

These portraits would appear in the level selection screen. 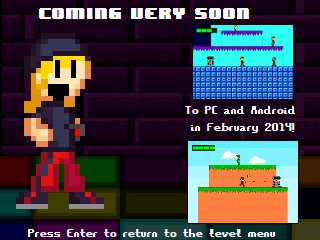 A static "Coming Soon" graphic. It shows Stanstone Mountains with a blue sky instead of orange. 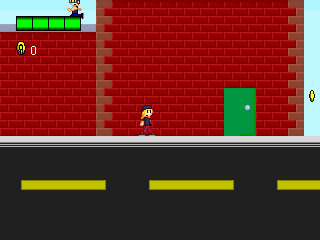 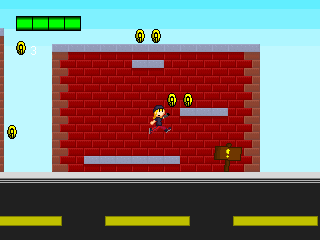 An early version of The City of Costansin. The room is rather small in width and ends prematurely, without a flag to shoot to clear the level. 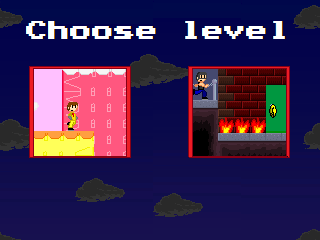 The level selection screen from a demo build. 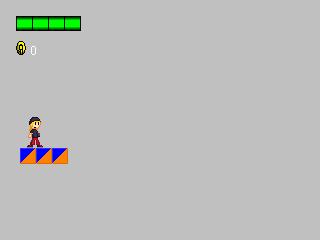 A placeholder room. Used as a base for every new level to be created. 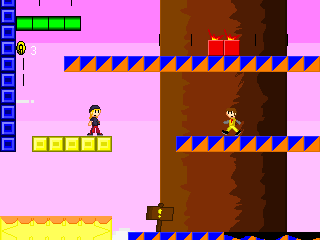 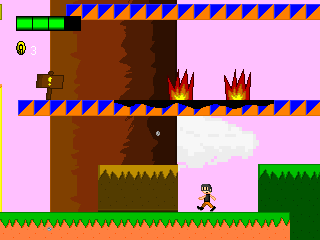 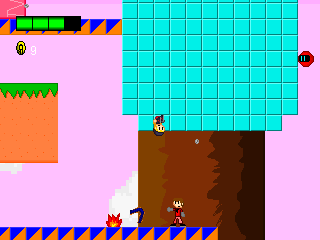 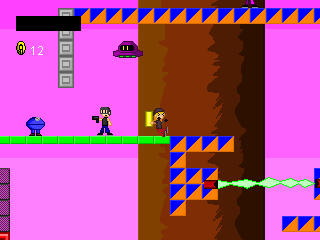 A wide test level was used for testing out new enemies and terrain.