This is a sub-page of EarthBound Beginnings.

MOTHER was a major localization milestone for Nintendo of America in 1990. Upon its conversion to Earth Bound, several improvements were made to make it more accessible for western markets (which at the time, was not anywhere near as receptive to the role-playing game genre as in Japan), as well as many graphical changes and additions done at the leisure of the team. The most major addition being the expansion of the ending, which in the original was left abrupt and visually unceremonious. Much like the game's cancellation in 1991.

This edition would not see an official release until twenty-four years later on the Wii U Virtual Console in 2015. All was left untouched from the prototype that leaked in 1998. All descriptions here are based on the latter, which was released on the aforementioned platform as the final version.

The Japanese version had a "Time Machine" item for sale in Twinkle Elementary School which, if bought, would trigger a short event not present in Beginnings: the player is teleported to the same room directly after Lloyd blows it up with a bottle rocket.

Through some simple hacking to copy the NPC data from the Japanese version into the US one, the event will be restored. Mother 1+2 does not have this item or event, either.

This item is still in Beginnings and is fully functional. Using it simply displays the string "Ninten checked the map."

The Friendship Ring (known in-game as FrndshpRing) appeared in the Japanese version of the game. It was useless and did nothing, so in Beginnings it was replaced by the Repel Ring.

Beginnings changed the appearance of some characters, although most of the edits were minor (such as the stripe on Ninten's shirt). All of these changes were carried over to Mother 1+2. It's interesting to note that a few NPCs like Ninten's mother Carol were edited in order to look less like Peanuts characters. In typical NoA fashion, all religious symbols were removed, including the priest's rosary. Some of these changes were reverted in all versions of EarthBound or Mother 2 for similar-looking NPCs such as Ness's Mother and the Return Woman in the Department Store of Fourside and Twoson as well as the salesman of the "For-Sale" sign in Burglin Park.

The final two NPCs' edits appear to be little more than stylistic touch-ups.

The crosses on top of the churches were replaced with a taller, pointier steeple, while the large crosses on the back walls inside were changed to large stained-glass windows. While the steeple is a simple graphics alteration, the stained-glass window was edited on the palette and CHR-ROM level, so attempting to copy and paste the large cross back into Beginnings will result in graphical glitches.

Both of these changes were retained for Mother 1+2.

But the overworld graphics weren't the only thing that got changed during the localization process...

The crow had its cigarette removed in the English releases as well as the Japanese Wii U Virtual Console release. This change also extends to Mother 1+2.

The bleeding gunshot wounds on the Gang Zombie were cleaned up, and a tie was put in their place.

The three female robot enemies had the lighting on their breasts adjusted to remove their nipples.

The dripping blood was removed from Shroudley's hands and around his feet.

Teddy B.B.'s Boss no longer brandishes a knife during battle.

A glitch involving the use of the Bread Crumbs item was fixed for Beginnings and Mother 1+2. One of its main uses is to bypass the rock sealing Giegue's lair, which doesn't normally open until you get the eight melodies, a glitch that has been used in Tool-Assisted Speedruns (TAS) of the Japanese version.

In the Japanese version, it is possible to abuse the Flea Bag item on R7038XX, dropping his offense to the point where he cannot kill EVE, and after 255 turns the battle automatically ends (as per the game code). As a result, the event for EVE dying and giving you the melody happens, but she also remains in your party - something which isn't supposed to happen, mainly because she's obscenely strong.

Beginnings and Mother 1+2 fixed this by granting the R703X-series robots immunity to the Flea Bag's effects.

A vast majority of the names of locations were changed from the Japanese version to Beginnings. To quote the localization producer:

"Itoi originally wrote them to sound friendly. I don't believe that towns named after holidays was friendly. Matter of fact I thought it sounded stupid and thought older players would really be turned off. I wanted it to be enjoyable for all ages."

The menus have some more options in Beginnings and Mother 1+2, such as more speed levels. The world map is also not an option and rather a separate item in the Japanese release, found in the basement (and replaced by Bread in Beginnings). The order of learned PSI is also different.

On the main HUD (at the bottom of the screen when the command window is open and during battle), the stats were rotated so that Level is first in the US version (compared to last in the Japanese version). This was possibly so that the character names could be extended an extra character (from 6 to 7) without touching the stats (since Level is only two digits).

In-game item descriptions (the Look command) were added for Beginnings and Mother 1+2. 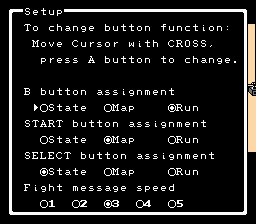 A setup option was added in Beginnings. It lets you change the button assignments and the text speed throughout the game.

Beginnings changed the position of the critical condition and fainted status colored backdrop to the HP number. In the Japanese version, this position was in the party member's name.

In Beginnings and Mother 1+2, checking an enemy in battle will display that enemy's stats as well as a short description. In the Japanese version, only their stats are displayed.

A rolling background effect, not present in the Japanese version, was added to Beginnings when learning a melody. This was programed into the subroutine that plays music: any values containing one of the melodies will use the background whenever they are called, and revert when the song changes. In Mother 1+2 the lines were made wavy which was most likely done to reduce the risk of seizures.

Beginnings and Mother 1+2 contain simplified versions of the Underground Stream (in the Magicant wells) and the path to Mt. Itoi, as well as the layout of part of Spookane. The cave on Mt. Itoi's ascent (which EVE can access) was removed and placed at a new, short forked pathway at the end of the game.

Beginnings and Mother 1+2 added a run button (to move at a doubled speed), which by default is set to B and R, respectively. According to Phil Sandhop, the localization producer and English script writer for the US version, the running feature was originally added for debugging purposes but ultimately retained as a legitimate game feature at his request.

Two of the NPCs in Magicant were substantially changed. One of them is the man who appears in the fountain: he cures ailments in the Famicom version, but acts more like an ATM in Beginnings and Mother 1+2. In the Japanese version, he asks "What do you need?" and the choices "Cure Poison" and "Soften" appear. This change makes him more useful, since you can simply return to the hospital in town to cure those status conditions.

The other is the Forgotten Man: in the Famicom version, should a player answer one of his questions wrong, they're warped right back to the beginning of Magicant. In the Beginnings and Mother 1+2, he simply ends his dialogue, allowing one to quickly start his prompt over again.

After the R7038 battle, you appear at the Doctor's house near the foot of Mt. Itoi, with Teddy injured on a bed, unable to continue. Beginnings re-positions Teddy on the bed.

In the Japanese release, upon learning the seventh melody, you are automatically warped back to Queen Mary, who remembers the 8th melody on her own. Beginnings requires you to collect the eighth melody and return to Queen Mary yourself. The dialogue associated with the Japanese version of events is in Beginnings, but unused.

The rock graphic obstructing the final lair was changed, and there is no Starmen-infested final path that leads to the final boss and captive adults.

The room containing the kidnapped adults from Easter/Youngtown is elsewhere on the mountain in the Japanese release, where EVE can easily access it.

The ending was heavily revised for Beginnings. In the Japanese version, the party simply faced the screen as the credits rolled behind them.

This said, despite the change, there are a few errors in the ending: the heavy NPC who had changes done to his sprite in the US version uses his original Japanese sprites, and Ninten's sister Minnie uses Mimmie's pink color palette rather than the red palette she wears throughout the game.

The revised ending was retained in Mother 1+2. Though Minnie is now properly colored red, the heavy NPC still uses the wrong sprites.

Retrieved from "https://tcrf.net/index.php?title=EarthBound_Beginnings/Regional_Differences&oldid=1320570"
Categories:
Cleanup > To do
Subpages