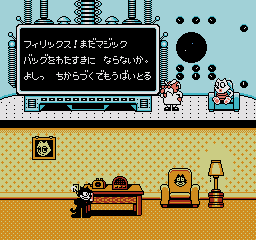 Although the game was not released in Japan, Japanese text still exists for the cutscenes in the ROM, along with code to load the appropriate characters into the PPU. Edit RAM address $03C8 to be $00 rather than $80 to see this in-game. Alternatively, use one of the following Game Genie codes to see it in-game: AEUGTZEA (US version, affects PRG ROM address 1c2c6), AEUKPZEA (European version, affects PRG ROM address 1c2b9), AEKEALEA (unknown version).