Fighter's Destiny is a fighting game for the Nintendo 64. It's one of not too many games with the distinction of having been developed in Japan, but only getting a domestic release there long after it has been released in other regions. 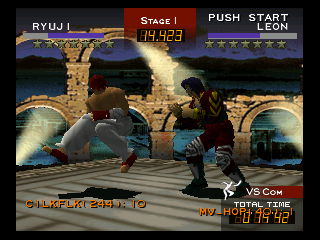 The following GameShark code will enable a few debugging indicators, namely move information that is displayed during fights, as well as a version number and build date on the Options screen.