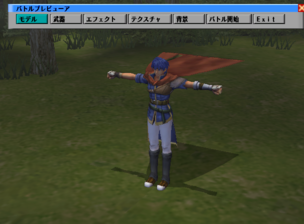 The "Battle Previewer" (バトルプレビューア) menu is basically a model viewer that lets you test and mess around with battle models, animations and effects, featuring a cute faux-Windows interface. Unlike the regular debug menu, none of it was translated from Japanese at all, and a fair few of its functions seem to be broken.

Enter the appropriate Action Replay code for your version to replace the "Connect GBA" option in the Extras menu with a "Debug" option that opens the Battle Previewer: 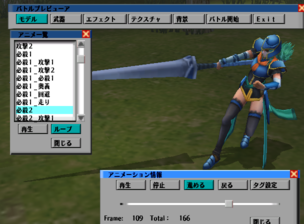 Brought up when you select the Model option and presents a list of every class model in the game (male, female, and the occasional character specific variant). Select one to bring up the Animation List.

There's also a drop box at the bottom that contains the command "Light OFF" (ライトＯＦＦ), but it doesn't seem to be selectable at all anymore.

Opens a dialog box that lists all possible animations that could occur in a battle scene. Press Start/Pause to switch between just playing the chosen animation once (再生) and looping it indefinitely (ループ). Naturally, attacking animations require a compatible weapon to play properly, otherwise the model goes into a T-pose.

There are also a lot of combined animation commands listed (e.g. 攻撃１＿奥義, a first attack followed up by triggering a mastery skill), but none of these seem to work anymore and just put the model in T-pose.

Opening this window also opens the Animation Information window along the bottom.

Has a progress bar tracking the length of the animation in frames and the current position in playback, plus options to manipulate playback.

Lists two options: Impact and Damage. The window doesn't seem to respond to inputs anymore, though, so you can't choose between them or reach the Select (決定) to execute their function. 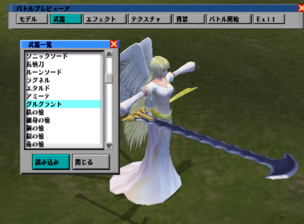 Opens a dialog box that lists weapon models, which are added to the unit model when selected. Every weapon in the game is listed (except for the devil axe, given its lack of a model). Oddly, all the tomes and laguz weapons are listed here too even though none of them actually involve putting a model on the wielder, but adding these to magic users and laguz classes is still required to test their attacking animations.

Amusingly, when you're just adding the weapons at this stage, you don't even have to worry about compatibility with the model class for most of them as long as an animation is not currently playing. It'll just put, say, a lance in Ike's hand, or a sword where an archer's arrow would be. The only exception is bows, which if given to a class that can't use them will behave very strangely, often becoming grotesquely oversized or twisted. If you try to play any animations with an incompatible weapon, however, the game will crash.

Incidentally, three of the S-rank tomes are referred to by completely different names in this list: Rexflame is "Forblaze" (フォルブレイズ), Rexbolt is "Mjolnir" (ミョルニル), and Rexcalibur is "Fimbul" (フィンブル). These early names (two of which previously appeared as powerful tomes in earlier Fire Emblem games) can also be seen in the weapons' file names. 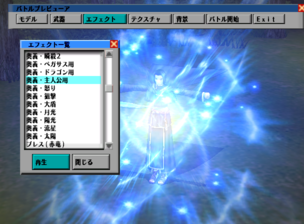 Opens a dialog box that lists visual effects seen in battle scenes. Covers almost everything: tomes, skills, footsteps in water, sand and snow, dying, changing class, and even parts of the HUD! The elemental tomes' effects aren't labeled by their actual names, but rather by generic numbered labels - e.g. Elfire is "Fire2" (ファイア２), Bolganone is "Fire3" (ファイア３), and Rexflame is "Fire4" (ファイア４).

There are six options which will crash the game if selected:

This was presumably an option for selecting which set of textures the model should wear, out of the three army affiliations:

However, in the game's current state selecting any of these does nothing at all, and may even crash the game. 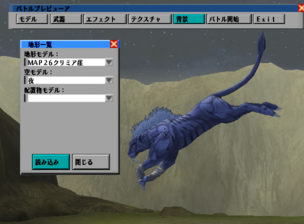 Opens a dialog box that allows you to set up the background scenery to test your model in.

Select Load (読み込む) and the game will reload the scene into your chosen configuration. 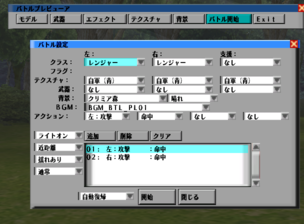 Opens a large dialog box that's supposed to simulate battle scenes according to chosen variables, similar to the one found in Monshou no Nazo. However, selecting the Begin button (開始) will always crash the game on an emulator, at least.

Closes the menu and returns you to the title screen.

Retrieved from "https://tcrf.net/index.php?title=Fire_Emblem:_Path_of_Radiance/Battle_Previewer&oldid=801634"
Categories:
Cleanup > To do
Subpages