From The Cutting Room Floor
< Fire Emblem: Monshou no Nazo
Jump to navigation Jump to search

This is a sub-page of Fire Emblem: Monshou no Nazo.

Fire Emblem: Monshou no Nazo's debug menu lets you test out battle scenes with a pretty impressive level of detail. It features a massive list of variables to mess with, generating battle scenes that play out exactly according to your chosen settings, regardless of whether said settings make any sense together or happen to contradict each other.

To access the menu, set the bytes at 7E074A and 7E0C0B to 06 and you'll be quickly redirected to it. You can do this at any point, but it's quickest to do so when the game is booting up. 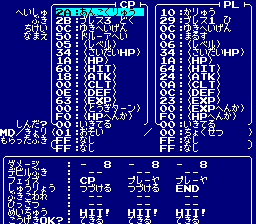 The upper section of the menu mostly affects what is displayed in the tested battle. It is split into two columns: the left CP column affects the enemy unit, and the right PL column affects the player unit. Its last few options relate to the outcome of the battle. 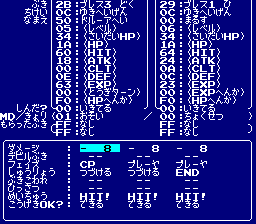 Press Select on the main menu to switch to the lower menu, which allows the player to tweak the actual events of the tested battle. There are options to modify the effects and results of all three of the strikes that will be undertaken in the battle scene: the initial strike by the attacking unit, the counter-attack by the defending unit, and one last double-attack by either unit. 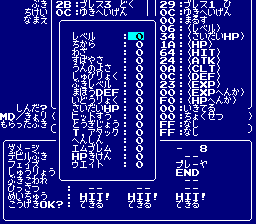 Press Start at any point to bring up one last menu to tweak player-side elements of the battle scene and its outcomes. Once you have finished making your tweaks, press Start again to start the battle scene. To back out of this menu without starting a battle scene, press the Select button.

If you set a class/weapon mismatch and begin a battle sequence, the mismatched unit(s) default to an unarmed lord who does nothing. The scene otherwise plays out normally. The exception is if the mismatched class is a shadow dragon, which will just cause the game to softlock. The game will also softlock if you set a cleric or bishop with a staff as its "weapon".

When selecting characters, classes and weapons, the debug menu reads from a completely separate list of name strings. Though their contents are more or less the same, the biggest difference is that this batch does not use kanji at all and spells everything in just hiragana and katakana. The strings also have a maximum length of 8 characters, while in ordinary gameplay only 7 will fit.

There are a handful of notable exceptions, where the debug listings go under a completely different name from the finished product, hinting at other changes in development.