A special edition of From TV Animation Slam Dunk: Yonkyo Taiketsu! offering "all-star" teams, although there is no longer a "story" mode. 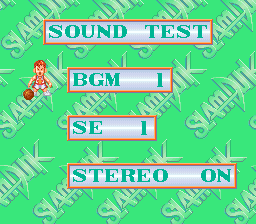 Pro Action Replay ROM patch code 80806015 will start the game in a sound test. The original game has a sound test. Press A or Start to return to the main menu. 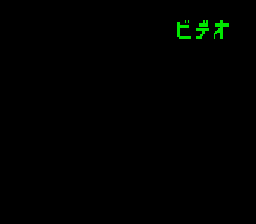 In three ways, the game will detect for any piracy activity during most screen transitions. PAR code 8080600F will start the game in the anti-piracy screen.

One is by saving (of which a legitimate copy of the game cannot do, but a copier can). Two, by writing to read-only memory (obviously impossible on a legit cartridge). Three, by checking if the game is played on a PAL-region console.

Should the game detect itself as a pirated copy, the game will display a black screen with the Japanese katakana word ビデオ ("video") on the top right corner of the screen, apparently imitating the video input channel display on common television sets. The text then proceeds to behave erratically, as if the TV had glitched. Presumably, this screen was designed to taunt pirates for playing an unauthorized copy of the game.

Located at SNES address 829000 is some unreachable code that checks if Down+B is being held on controller 1, and if so, checks for the string "SLAMDUNK_DEBUG" at address BF8000. (The address in question, which is far beyond the end of the final ROM, suggests that the game was at least 512 kilobytes larger during development.) If the check succeeds, the game begins to execute debugging code located beginning at address BF800E. Text for "SLAMDUNK_DEBUG" is located at 0x01102B.

The Pro Action Replay code 828FFFEA will re-enable this check, accessible by holding Down+B and pressing Start at the title screen. However, because the debug code and the "SLAMDUNK_DEBUG" string are no longer included in the ROM, this doesn't actually have any effect; the check will fail and the game will still proceed to the main menu like normal.

The second game has an extensive debug mode fully intact, complete with the same "SLAMDUNK_DEBUG" string at the beginning of its ROM bank; this may indicate that the first game originally contained the same (or similar) code.