Front Mission: Gun Hazard is a side-scrolling platformer/shooter spin-off of Front Mission, a series of tactical RPGs about robots.

A partial recording of a vulgar diatribe is present in the ROM. This is sampled from a phone call by a member of a UK radical right-wing organization Combat 18, likely taken from the song "Dog Tribe" by Fun-Da-Mental. Its full transcript (bolded segment only included in-game):

The sample is used very quietly and covertly just after the end credits. 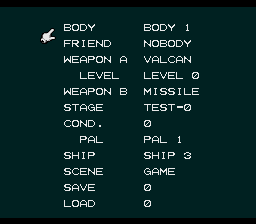 Start the game with Pro Action Replay code C002EDF1 active to access this debug menu, which allows you to customize a wanzer, jump to a specific stage, etc. Data can also be loaded/saved from/to a saved game, which makes this function as something of a save editor.

Selecting "BEGINNING" or "CONTINUE" from the scene menu lets you start or continue the game, respectively. 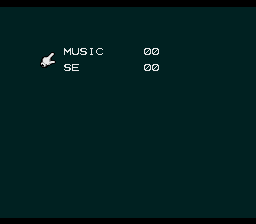 Select "MUSIC" from the scene menu to access a basic sound/music test. Press Y to play the selected music track or sound effect and Start to return to the debug menu.