This is a sub-page of Harvest Moon DS.

Note: The region-exclusive glitches can be found on the Bugs page.

In the Japanese version, the Marvelous Interactive logo while the title screen music plays, but in the international version, the music plays after the logos are shown. This isn't applied to DS Cute.

The publishing company of the game varies between regions. In North America, it was published by Natsume while in Europe it was by Rising Star Games and in South Korea it was by Daewon Game and IroNos.

The Marvelous logo was updated with the one used in the international versions of DS Cute in the South Korean version of the game, as Marvelous Interactive was now known as Marvelous Entertainment at that time. 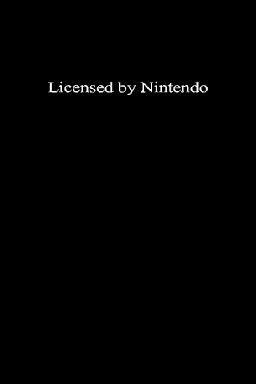 In the international versions, a screen saying "Licensed by Nintendo" was added in.

The copyright date of the title screen got updated in each regional release. The characters at the bottom are more distanced from the player and the Harvest Sprites outside of the Japanese version, likely to make room for the "New Game" and "Load Game" graphics.

The logo in the Korean version is almost identical to the Japanese one, only missing the texture that was present in the original one.

Changes from the Japanese Version

The Sprite Casino location had the "CASINO!" lettering removed in the international releases.

At the beginning of the game when Thomas greets the player and the mayor gets attacked by the player's dog, the player has a choice of saving him or not. If he isn't chosen to be saved, the screen fades to red before the credits start to roll. The color was changed to white in the North American version, likely due to it looking gruesome, but it was strangely changed back to red in the European and South Korean versions. Additionally, the text in the North American version gets cut off as the white fade prevents the last few characters from being displayed.

In the Japanese versions, by linking A Wonderful Life (GameCube) to Friends of Mineral Town, then to Harvest Moon DS, a grave with the name of the protagonist from the GameCube should appear. In the US versions though, it requires instead only Friends of Mineral Town, and shows the name of the hero from that game. The JP manipulation is possible in the US version, though it can trigger a serious glitch with the save file.

The Japanese version also has an Achievement system which is exclusive to it. It shows up as logs when linking with both versions of Friends of Mineral Town. The Boy version logs talks about Mining, Fishing... while the Girl version talks about festivals.

The HUD on the top screen is somewhat different in the European version of the game. Days of the week are now shortened (ex. MON = MO) and color-coded. This change would later be carried onto Cute.

The graphics for the three periods were moved from the center to the bottom, as the former position is used in the Japanese language.

In the Japanese and North American versions, there are three tables in the Casino with different games: Poker, Black Jack, and a card-based memory game. In the European and South Korean versions, the Poker and Black Jack games were completely removed and was replaced with the card-matching game. The text is even removed.

It was likely done to remove gambling references as the PEGI introduced a new age-rating descriptor based on it around that time.

The Church (that can be called from the telephone at home) was renamed to the Temple in the European versions along with the Cursed Tools descriptions. It was probably done to remove some religious references.

The most notorious feature that was removed in the European versions were the Game Boy Advance link. This made a couple of things completely unobtainable without hacking, such as the Mineral Town characters appearing more often (with some as love interests), and the last five Records (Spring HM, Summer HM, Autumn HM, Winter HM and Last Dance) that could be bought from the Sprite Casino.

Strangely, a USA or European copy of Friends From Mineral Town can still be linked on a North American copy of the video game. But the Japan copy needs to be linked to its own region.