I'm sorry, Ico, but your princess is in the same castle/prison that you are in, and can't speak your language.

Present in the Japanese release, and left blank in the US and EU releases, are more subtitle files designed to be shown in cutscenes. The amount of unused files greatly outnumber the number of used subtitles.

Present in the root of the European ISO are four text files. What's notable about these, is that SRCFILE.TXT and TRFILE.TXT seem to be disassemblies of the code. The date these files were last modified corresponds to the build date of the binary. Also present is DUMMY.TXT which just contains the string "DUMMY" and MAIN.MAP.

It should be noted that it is because of these text files that the European version is the only one to be released on DVD format disc. 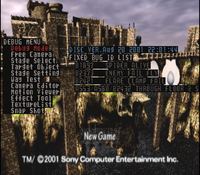 The US version running the debug menu. 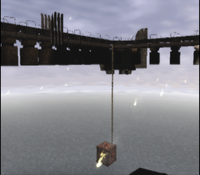 A cut portion of a developer level named ba_test.

Since the release date was scheduled in the US to be before the holidays, the US version was horribly rushed from the cut features to its cover art. The JP/EU version came out the year after the US version, which is reflected in the game's title screen. The HD version of the game is based on the JP/EU version.

The cut features from the US version:

Two-player mode- After starting a second game from a cleared file, a second player can play as Yorda (by adjusting a new "Players" setting in the Options menu).

Shining Sword- A secret weapon that looks (and even sounds, as it swings) like a lightsaber from Star Wars. The blade can vanquish shadows easily, and it has a very long reach if Ico is holding Yorda's hand.

Film-grain effects- A new option that allows the player to select from various film overlays, making the game look like an old film (The overlays are used in various parts of the regular game, including the early cutscene where Ico sees a shadow dripping out of Yorda's cage).

Extra ending- At the end of the game, Ico walks down a long beach to meet Yorda. If this is a second-playthrough file, several watermelons will be behind a large rock near the beginning of the path (the boat "points" right towards it). If Ico picks up one of the watermelons and carries it all the way over to Yorda, an extended ending will play showing them sitting together eating watermelons on the beach.