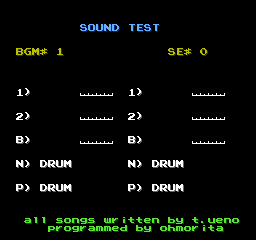 Press Up + Select + Start on the title screen.

This screen works with both controllers. There doesn't appear to be a way to exit it without resetting the console.

Some credits are shown at the bottom of the screen. "t.ueno" refers to Toshiyuki Ueno, while "ohmorita" refers to Fukashi Ohmorita.

This string appears seven times throughout the ROM:

As previously established, "Fukashi" is Fukashi Ohmorita. A similar credit can also be found in Monopoly for the Super Famicom.