Jill of the Jungle

Unlike later Jill games, Jill of the Jungle mostly occurs inside one giant level with teleports taking you from place to place. Some of these levels are slightly visible from inside each other.

Using the editor, it is possible to place a small number of items that were not used in the game. Most of these have no effect, but the artwork is present. 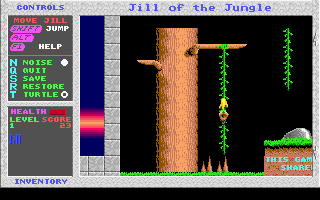 Jill main menu, being played as a game level!

Like the later Xargon, which uses the same engine, many of the screens in Jill are not graphics but actual levels. By renaming certain game files, these "levels" can be played. Renaming the files below so that they are named 1.jn1 makes these extra levels playable by starting a new game and entering the first level from the world map.

It is worth noting that in the second and third demo level, there are creatures from the later episodes that are fully functional in the shareware episode 1. However, they are not used anywhere else in that game.