Jill Goes Underground is the sequel to Jill of the Jungle. Sound effects are very limited and strange, presumably cribbed from somewhere. Oddest of all, the green things in ceilings which spit fire say "Action"!

A similar label is displayed in the hub level of the previous game. Since all the levels in the second episode are consequent there is no need for the hub map, as well as this map label. 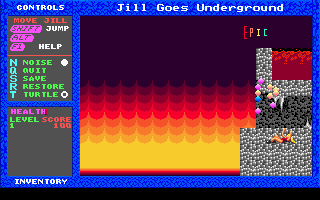 Jill dies in the main menu.