Joe & Mac is an SNES port of the arcade game where some cavemen fight dinosaurs using really nifty weapons. 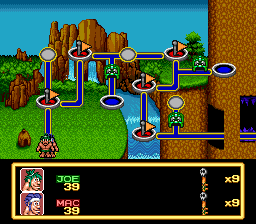 In this debug mode, Joe and Mac start a new game with 39 lives and 9 keys each, and all red stages are cleared. Unlike the first debug mode, the blue stages (which can only be played once) are still accessible.

The secret combination suggests it was once intended to be a player accessible cheat, but in the final version the game skips over the programming that grants the bonuses. A fragment from a prototype build contains a copy of the programming before the debug mode was disabled. 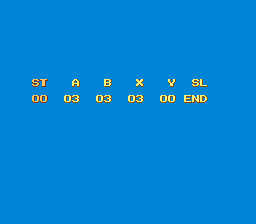 This sound test is available in the Japanese and North American versions, but not the European version.

Use the D-Pad to change the index values (the exact purpose of each setting is not yet clear). Press Start to transfer sound data? The A / B / X / Y buttons are used for playing songs and sound effects. Press Select to exit the sound test. 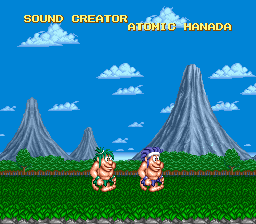 When the credits scroll pauses on "SOUND CREATOR ATOMIC HANADA" as pictured in the screenshot above, the game checks if X + A + L + R are held. If true, the game shows an alternative ending sequence of Joe and Mac being chased away by 4 ugly women:

To skip instantly to the ending after the Data East logo in the NA version, use Pro Action Replay (PAR) code 00FB0707 or Game Genie code D5ED-AFA4.

These icons (or versions thereof) can be found in the game's graphics shortly after where the ones used in the final are stored.

A hammer, which is never found anywhere in the game.

Due to the very subtle differences, the following icons include the finals (left) for comparison purposes.

The boomerang, with slightly thinner outlining near the ends.

The stone wheel, slightly more darkened-in than the one in the final.

Located at SNES address $08C609-08C614 (NA and JP versions) is two checks for the controller 1 R button being pressed or held while playing a level. However, the following branches have a distance of zero, meaning the alternative code paths were deleted.

The L or R button depending on where Joe or Mac is facing, usually makes them run.

As Elite Systems published the European version, the Data East logo was replaced with their logo. This also led to the "Data East" jingle being removed.

Due to Nintendo of America's censorship policies, the intro cutscene was significantly reworked between the Japanese and international versions. In the Japanese version, there's a scene of a few cavemen entering a tent at night, a female "yelp!" is heard, the tent rustles, and the cavemen promptly drag some cavewomen out while the opening credits scroll by. Since this could be interpreted as the beginning (or the aftermath) of sexual assault, the cutscene was truncated so that it ends after the yelp, and the credits were replaced with a totally radical (ergo: aggressively '90s) text crawl that implies that the cavewomen weren't kidnapped by the cavemen, but instead ran away due to their poor hygiene.

In the two-player mode of the Japanese version, a player that has lost all their lives can steal one from the other player to continue (indicated by "PUSH BUTTON" in the HUD). This feature was removed from the international versions.

The HUD was also moved down one tile in the international versions.