The Caveman Ninja, better known as Joe & Mac, must battle a tribe of figurative-but-quite-possibly-literal neanderthals who have kidnapped their cave-babes (it was the caveman '90s) across five prehistoric lands with branching paths.

Holding 1P Start + 2P Start when the game boots should display a version info screen, but the developers added a rts opcode at the beginning of the routine to dummy it out. Put the appropriate code in either cninja.xml or joemac.xml to re-enable this feature:

These would be used in location test versions of the game, but there's no code that references this screen's subroutine in the final game. 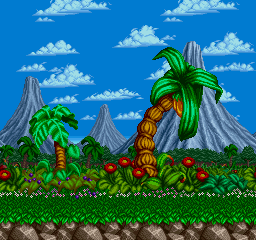 This is a simple test of the ending screens. The game will display the first two pictures of Joe & Mac reacting in shock, all three of the game's different ending pictures (Fat cavewoman, enemy cavewoman, cave-babes), then the scrolling credits landscape sans objects and credits.

An item that would give players their default weapons back (Stone Axe for 1P, Bone for 2P), but none of the enemies or objects in the game are coded to drop it. 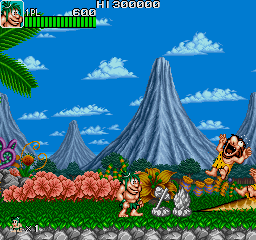 Put the following code in MAME's cninja.xml cheat file to make the first caveman in Stage 1 drop the item, and make the second caveman drop the Fire weapon:

The item will always use the axe graphic, even if 2P is the only one playing. There's a bone item graphic in the object graphics ROM, but there's nothing in the item's code that references it.

Two unused characters that would appear on the game's map screens: The cavewoman from Stage 1 in a neutral stance, and an enemy caveman. 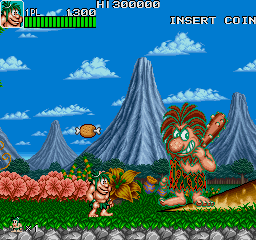 Put the following code in cninja.xml to change the first enemy caveman in Stage 1 to one of the unused characters, albeit with an incorrect palette:

A fossilized trilobite that would have appeared in the background of the high score screen. Even though there's plenty of space for it in the upper-right corner, it's still unused.

A hidden message (カネコが書いた - "Written by Kaneko") stored with the Stage 5 background graphics. Atsushi Kaneko is one of the game's six graphic designers.

Graphics for an ammonite enemy can be found mixed in with the game's food items.

A partial set of alternate food items appear directly after the ammonite graphics. Includes a different tomato sprite, a banana bunch (As opposed to the banana peel that the final game uses), eggs, cheese, crackers, and bugs!

Like the similarly sized dinosaur enemies, this has idle, turning, walking, and running animations.

It also has the standard set of hurt and dying animations that every used enemy has.

Unfortunately, the enemy was never coded, so all it's doing now is taking up a significant chunk of the object graphics ROM.

The Stage 4 cavewoman has an unused animation of her looking off to the side. It's worth noting that none of the other cavewomen are animated; this was probably meant to be used on the location test screen.

Labels for the game's music, sound effects, and instrument samples can be found in the audio CPU. 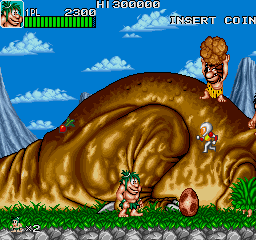 In the Japanese version only, hitting certain spots in the first two rounds will reveal a special bonus item: Chelnov! After appearing, he'll try to escape by running to the left. Collecting him earns the player 1000 points. 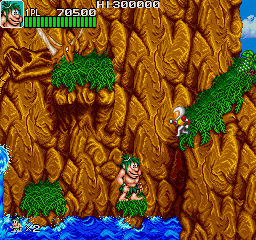 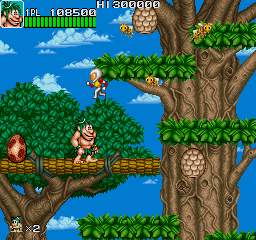 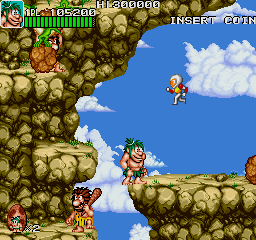 This object is still in non-Japanese versions, but extra code was added to the object's initialization subroutine that instantly deletes it.