Ascent 1 begins the final stretch of the game, as Anne ventures closer to Mount Watson. Originally, the level began directly after The Lab, but the starting point was later pushed further up for unknown reasons. It was also supposed to be conjoined with Ascent 2 as one very large stage, but that had to be changed as well. This Spas-12 is buried under the terrain. Coordinates have been included in the screenshot. 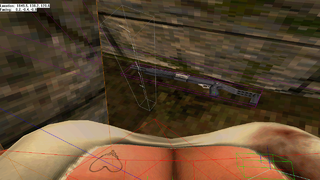 Another one can be found buried nearby as well. 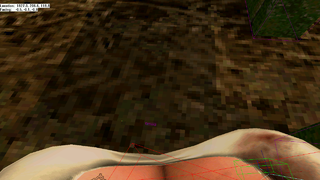 This Desert Eagle is so far underground that it's difficult to spot, even with the BONES cheat enabled.

The elevator that carries Anne up to the Summit at the end of Ascent 2 is also present in Ascent 1, albeit in a very primitive form. It has no scripting or physics, and is not fully modeled. This is apparently a remnant from the original single-stage plan for Ascent, which would have progressed from the base to the cliffside with no breaks. A small, rectangular piece of collision data laying on top of Mount Watson, not far from the unfinished elevator. Most likely another remnant of the original one-level plan for Ascent.

In addition to the elevator above, there are many other objects scattered throughout areas beyond Ascent 1's end. In fact the first portion of the map layout is almost perfectly preserved. Trees and rocks are even placed on the slopes and valley below.