Commander Keen in Keen Dreams, sometimes referred as The Lost Episode, is a rather odd game. The game takes place in Keen's dreams, where he is bombarded with enemies resembling a certain type of food he doesn't like. Quite a bit of the game appears to have been cut due to Softdisk's demand to put the game on a 360KB floppy disk. The 2019 port to the Nintendo Switch had no such limits, clocking in at 45 MB in size.

Part of the ending sequence, presumably. In the final game, the ending only has text, either due to the aforementioned space limit or the fact it looks kinda weird.

These two tiles for exit sign have a metallic pattern on the bottom. No level has a metallic scheme and this appears to be all that remains of the scheme. 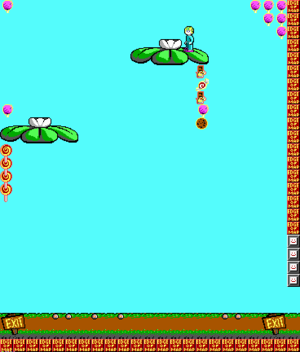 The game contains a level which is not accessible through normal gameplay, and can only be accessed by warping to it. Oddly the same level is accessible as levels 6, 8, 11 and 13. 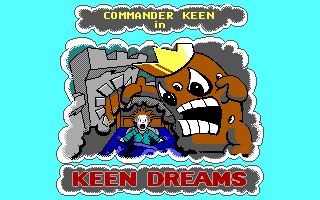 In 2019, a company called Lone Wolf Technologies LLC obtained the rights to the game and ported the whole shebang to the Nintendo Switch with a couple of enhancements and changes:

Other than that, it seems like the port was based on v1.92 REV 0, right down to the 1993 copyright (which still reads "Softdisk Publishing") and final title screen.