Langrisser II is the Japanese-only sequel to the first Langrisser (Warsong in North America). It continues the struggles of the Descendants of Light to fight off those pesky monsters and evil-doers who think ultimate power will solve all their problems. It was eventually translated by the M.I.J.E.T. translation group. The game's setting, characters, and basic story were recycled and remade later as Der Langrisser. 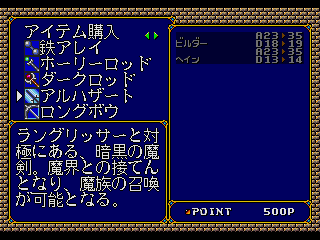 The demon sword Alhazard has a fully-written description that can never be seen by players because the sword cannot be acquired without using the debug secret shop or hacking the game. The description reads: "Langrisser's counterpart, the Demon Sword of Darkness. Hailing from the Demon World its wielder is able to summon monsters."

Alhazard cannot be equipped by any player character and does not display the +12 attack bonus it grants.

The developers left a number of debugging shortcuts in the final game.

Level select: At the load/save game screen highlight any of the four save slots and press Left, Right, Start, C. If done correctly the window above will show a number that can be changed by pressing Up or Down on the D-Pad. Pressing B will cancel, and pressing C will jump to the selected stage's prologue.

Control all enemies: During the player phase of any stage enter the following sequence of button presses: Up, Left, Up, Right, A, Left, Down, B, Down, Right, A, B, Down, Right, A. If successful a chime will ring. This puts every unit under player control, gives them an unlimited number of moves (though it will still grey out the palette and display E for player forces) and allows all units who can cast spells to cast any in the game. Units can only attack those who belong to opposing factions and temporarily return to AI control if the player chooses to end the player phase.

Secret Shop: At the root intermission screen (after the prologue screen when the player can choose how to set up their forces) press A, B, A, B, Up, Down, Left, Right, Start, B. This changes the contents of that stage's shop to include every player-usable piece of equipment except the unsealed Langrisser and the special items needed for summoning monsters. This was probably used to test various gear combinations and their effects on the game's difficulty curve.

Debugger's Secret Shop: At the root intermission screen, press B, Start, Right, Left, Down, Up, B, A, B, A, Up, Down, Left, Right, Start. This changes the current shop to include all items in the game.

At 0x200 is the following message:

Scott has an unused angry portrait. Scott is never seen angry, so this is unused.

Bernhardt has an unused angry portrait as well. It is in an apparently unfinished state. This portrait was reused in the Der Langrisser remake for when Berhardt was defeated late-game in some of the branching paths.