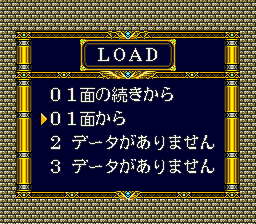 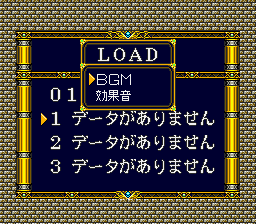 In the load game menu, highlight any save slot and press Left, Right, Select, A. The sound test menu will appear.

The top option is a BGM test: 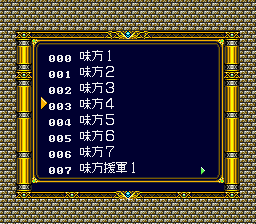 And the bottom option is a sound effect test: 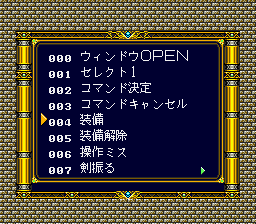 In both menus, Up and Down toggle the track to play, Left and Right change the page, A plays the selected track, and B exits the menu.

A battle test also exists, but the only known way to access it is by entering the sound test code in the full English translation.

This appears to be intended for testing. This allows you to select and order around enemy and NPC units. Interestingly a lot of mages have irregular spell lists. A high level mage might only have three spells instead of 12-15, which explains why AI mages do not use spells they would be expected to know. Also, neutral units can sometimes be attacked by enemy units when you order them to do so, for example AI-controlled Aaron can attack and kill civilians, and Rhianna in the first scenario can attack the imperials if ordered to do so. The programmers probably left it up to scripting so the AI does not make unintended attacks.

Using this code reveals that high level summoners do know at least the summon spell of their class (white dragon, demon lord, etc.). The AI will typically never cast a summon spell even when doing so would be highly advantageous. This seems to be an oversight by the programmers as this is not a difficult game. Many of the named enemies in the late game can cast summons but never do, including Bozel, Eggbert and Rhianna.

Elementals are an undead troop that has a map sprite of a puff of flame. They are only playable on Scenario 14 when Sonia joins with them. Even though some of Est and Ost's classes are stated to be able to hire them, they cannot actually be hired due to a bug. They would be a strong end-game troop if they could be hired.

On the flip side, there is a recruitable Demon troop that no class can hire that is on the list of hireable troops. These troops would only be playable in the early stages of the Chaos/Independent routes (Scenarios 13 and onwards) and the developers may not have bothered to add them to any classes as a result.

Many of the low-level monster units never actually appear as enemy troops. They still have money values if you kill them, though. For some you can only kill them if you have Est/Ost hire them on the stage where they temporarily become enemies on the Independent Path.