Warsong is the English release of the Japanese game Langrisser. It is a tactical simulation game where the player controls several major characters, each in control of their own array of units, in order to defeat the computer opponents who are similarly equipped. It is the only game of the Langrisser series to see a release outside of Japan until the Nintendo 3DS title Langrisser Re:Incarnation in 2016. 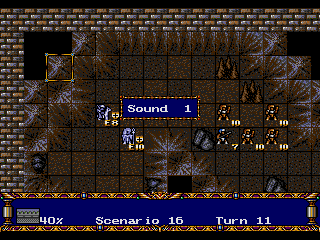 To access the sound test, move the cursor to position 1,1 (one tile down and one tile to the right of the upper-left corner of the screen) and hold B until a menu appears. Once the window is open, Up and Down scrolls the list, C plays the selected track, and B exits the menu leaving any selection still playing.

Values 1–17 are music tracks. Values 18–31 are silence. Values 32–63, the maximum the sound test can increment to, play the game's myriad sounds. 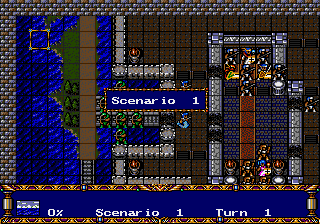 To access the scenario select, press A to switch to birds-eye view, then move the cursor to position 1,1 (one tile down and one tile to the right of the upper-left corner of the screen) and hold B until a menu appears.

Several tracks can only be heard by using the in-game sound test.

This might have been intended for an intermission or story segment or as part of the ending.

This upbeat tune sounds out of place with the rest of the game's music.

For the US version, four character portraits were altered in an effort to better appeal to a western audience. Their names were also changed.