Loadstar: The Legend of Tully Bodine

In an age long past, in a time of great abundance and grainy film quality, there were FMV games. And lo, they were pleasing unto mankind, and he did buy them in great quantities. But his excess proved his undoing, for quickly the fad died out; and then all that remained were unsold copies of Loadstar: The Legend of Tully Bodine, which is pretty much Sewer Shark in space on a monorail, IN SPACE.

It's not awful as these games go, but it's so short that it doesn't amount to much more than an ad for its (canceled) successor. Never count on a sequel, folks!

The files SCIENCE.TXT, GAMES.TXT, and MORTIMER.TXT all consist of this Shift-JIS string. That wouldn't be too unusual except this is actually an American game; it wasn't developed or released in Japan. (Rocket Science Games is the game's developer; Mortimer is a character in the game. There's also a ROCKET.TXT, but it just has a generic copyright string.)

This sentence seems to have been written by someone not very familiar with the language; ビデオゲムズ is both misspelled and not the term normally used in Japanese to describe video games (it should be テレビゲーム, or more likely just ゲーム).

This message is hidden in the disc's system area, at 0x86F in an ISO dump. Line breaks have been added for readability. These names appear among many others in the credits under "Engineers"; presumably, they were the (primary) programmers.

This "biography" of Mortimer, which parodies the style of the Tech Data bonus videos, is located in MORT.BIN. To view it, overwrite the string INTR at 0xC3A04 in OPTS.DAT with MORT, then select "Intro" from the main menu.

In the DOS port of the game, this video is an Easter egg that sometimes shows up among the various demo clips that play if the player idles at the main menu long enough, but that doesn't happen in this version (which just replays the intro). 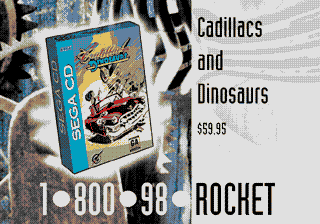 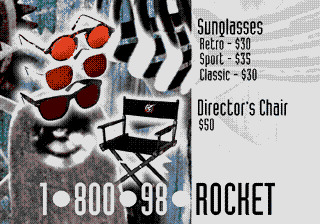 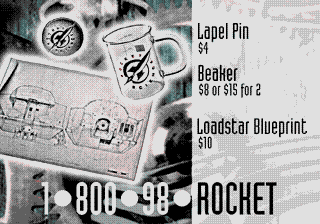 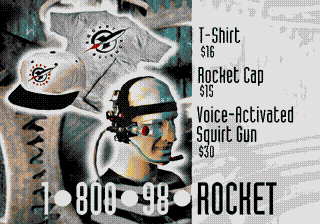 The data for these screens is found in the files CATB.DAT through CATE.DAT. To view them, use the same method as for the Mortimer video above, but replace INTR with CATB. Pressing the controller buttons advances through the catalog screens.

Track 2, the disc's only audio track, consists of this wonderful bonus recording of Tully(?) screaming in agony. AaaaAAAaaAAAAaaaAAAaa. 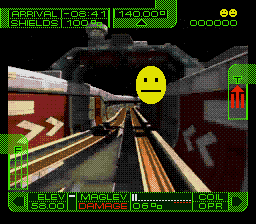 When Mortimer appears on-screen during gameplay, pause and press C, A, Left, Left, A, C, A, Left, Left, A (CALLACALLA), then unpause to start a hidden Pong minigame. Up and Down move the "T" component of the dashboard as the "paddle", while Mortimer serves as the ball. The main game continues running in the background, which makes things rather challenging. Mortimer gradually speeds up, per the original game; once he gets by the paddle, normal gameplay resumes.

"CALLACALLA" may refer to Sean Callahan, the first programmer in the hidden credits above.