Laser Invasion is a rather ambitious first-person action game that tries to be a combat chopper simulator, gun shooter, and maze explorer all in one...on the NES. The results are about as good as you can expect from the 8-bit console.

While the game is built around a wacky headset controller, it can also be played with a regular controller or Zapper.

Aside from the different title and coloring for the Konami logo, the Famicom version starts directly at the title sequence, whereas the NES version adds a copyright screen prior to that.

The options between the two versions are slightly different.

The on-screen indicators used during the combat chopper segments when approaching a supply stop or an enemy base were appropriately localized for their respective versions.

The mission clear screen in Gun Sight moves the helmet to the left in order to make room for the password given at the end.

Both versions have an internal region switch, though much simpler than the one found in Teenage Mutant Ninja Turtles III: The Manhattan Project. Game Genie code AEKVLZPA will switch the NES version to Japanese mode, while PEKTTZAA will switch the Famicom version to US mode.

When the region switch is activated, Gun Sight will switch the options menu to the version used for Laser Invasion and vice-versa. Only the names of the light gun peripherals will be left unchanged. However, the password support in Laser Invasion is non-functional and will freeze the game when used (making it impossible to use the 9PLY and HARD cheats). On the other hand, the 9-lives cheat from Laser Invasion will work perfectly fine on Gun Sight. The way continues work will also be changed as well.

The title sequence will also change slightly. While the title that gets formed will remain the same, the game will attempt to switch the flying letters to the ones used for the alternate title. However, due to different CHR data, they will not be displayed properly. This is because the Famicom version stores its katakana fonts where the NES version stores the flying letters, whereas the space for the Famicom version's flying letters on the NES version was replaced with placeholder tiles.

The language used for the cutscenes and dialogue will remain unchanged.

When the region switch is active, the Famicom version displays an extended version of the US copyright screen which credits Ultra Games, suggesting that Laser Invasion was originally going to be published under that branding by Konami. The finalized NES version was published under Konami's own label instead. 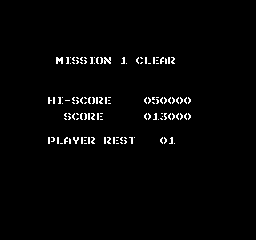 As with most games Konami has published since 1990, this game features a form of copy-protection: when booting, the game checks for the presence and integrity of a CHR bank with copyright tiles. Part of the copyright message screen contains the string "© KONAMI 1991", and the copy-protection routines check for that string.

If the test fails, the Japanese version turns on the hidden Hard mode by default, where one direct hit kills you instantly. Strangely, the US version does all the same checks and sets the same flag...but has none of the effects due to Hard mode being nonexistent in that version, even with the region switch set on.